Home Headlines Analysis-Aviation nurses a nasty headache as travel recovers from COVID
Our website publishes news, press releases, opinion and advertorials on various financial organizations, products and services which are commissioned from various Companies, Organizations, PR agencies, Bloggers etc. These commissioned articles are commercial in nature. This is not to be considered as financial advice and should be considered only for information purposes. It does not reflect the views or opinion of our website and is not to be considered an endorsement or a recommendation. We cannot guarantee the accuracy or applicability of any information provided with respect to your individual or personal circumstances. Please seek Professional advice from a qualified professional before making any financial decisions. We link to various third-party websites, affiliate sales networks, and to our advertising partners websites. When you view or click on certain links available on our articles, our partners may compensate us for displaying the content to you or make a purchase or fill a form. This will not incur any additional charges to you. To make things simpler for you to identity or distinguish advertised or sponsored articles or links, you may consider all articles or links hosted on our site as a commercial article placement. We will not be responsible for any loss you may suffer as a result of any omission or inaccuracy on the website.
Headlines

Analysis-Aviation nurses a nasty headache as travel recovers from COVID 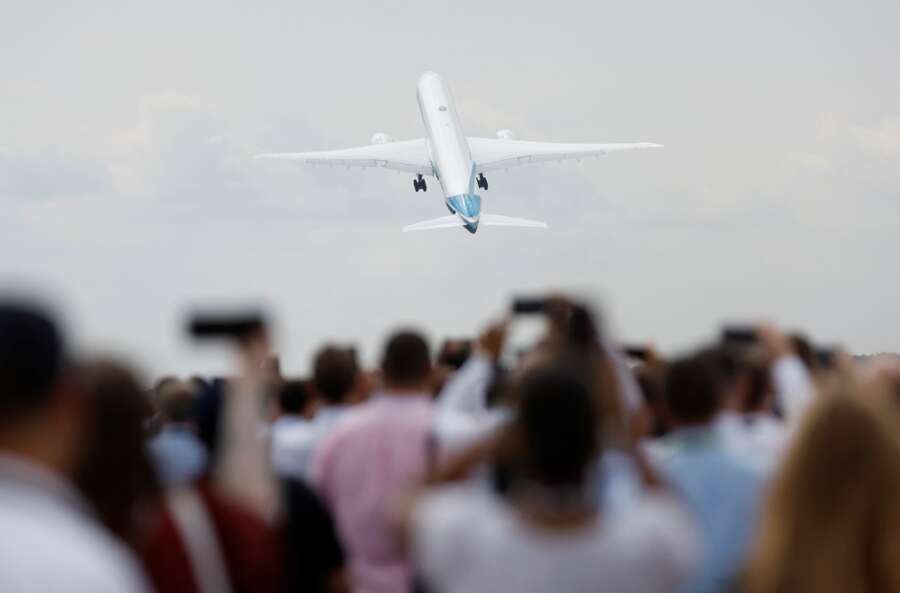 By Tim Hepher and David Shepardson

FARNBOROUGH, England (Reuters) – Aerospace has turned the page on an unprecedented pandemic demand shock with dozens new orders at its largest air show in three years – only to face mounting worries over supply chains and reminders that its future hinges on decarbonisation.

From rural Farnborough to nearby Heathrow, this week brought stark evidence of the supply crunch now entangling manufacturers and airlines alike, with shortages of both labour and parts.

It comes as airlines – whose expansion had propelled the industry to record profits in the past decade, only to collapse during the pandemic – are desperate to cash in on a nascent recovery in international travel.

Even the Farnborough Airshow struggled to find enough hospitality staff despite downsizing from a seven-day aviation festival to a five-day trade show with no weekend aerobatics.

“We have to accept that a lot of people left the aviation industry and the aerospace industry during 2020 and it is difficult to bring them back,” Emirates president Tim Clark told delegates after clashing with Heathrow over capacity curbs.

Departing Farnborough attendees got a personal taste of the resulting travel chaos after discussing their own shortages of labour, parts and materials at the July 18-22 aerospace event.

Long lines formed at Britain’s airports, Eurostar train terminal and the port of Dover on Friday – the start of the busiest travel weekend since 2019.

For years, the alternating Farnborough and Paris air shows fed a fast-growing ecosystem as airlines lavished new orders on manufacturers, who served that demand in part by encouraging their supply chains to set up facilities in purchasing nations.

Posters this week continued that theme of a connected, cleaner world as suppliers defended emissions targets, but campaigners said they did not go far enough.

Now, global supply chains need fixing and Western factories and the airlines they serve are also beset by problems. Longer term, analysts say supply chains are likely to get shorter.

“This is not a great year to say ‘you need a new supplier, have you thought about setting up here’,” a senior aerospace executive said. “The industry is hunkering down this week; there are not a lot of discussions with edge players or new entrants.”

Airbus in particular is wrestling with delays as it tries to increase output in anticipation of higher demand. In part that is down to engine shortages, which in some cases have been traced to glitches at tiny suppliers, executives said.

Despite the summer rebound – outbound airline bookings from the UK for example are at 88% of pre-pandemic levels, according to ForwardKeys – there were warnings that inflation could slow the rebound in air traffic that ultimately supports jet demand.

“The question is, are the near term economics going to change the slope of the curve? That’s the question we’re all asking,” he told Reuters, while adding the Raytheon unit would work to support planemakers’ ramp-up plans.

Boeing sought to answer that question, and lift concerns over the future of its 737 MAX cash-cow, with a flurry of announcements that translated into gains in its share price.

The future of the MAX, in the wake of two fatal crashes, a two-year grounding and ongoing regulatory issues, is key for the aerospace industry and airlines that have invested hundreds of billions of dollars in making or buying the medium-haul planes.

“Airlines want to support Boeing because they recognise that if they don’t, the competitive balance is irreparably damaged and with it any attempt to get discounts,” Agency Partners analyst Sash Tusa said.

Sitting on a hefty order backlog, Airbus had a quiet week after a massive recent order from China, allowing it to focus instead on setting out decarbonisation plans in Britain’s record heat, while leaving the Farnborough stage to rival Boeing.

“It doesn’t mean we are less committed to taking orders and growing the company,” Chief Executive Guillaume Faury told Reuters. “It’s probably just that the demand is less synchronised (with the air show) and that the supply chain issues are more (pressing) than in the past.”

U.N. expects Ukraine-Russia grain deal to be implemented in a few weeks -officials