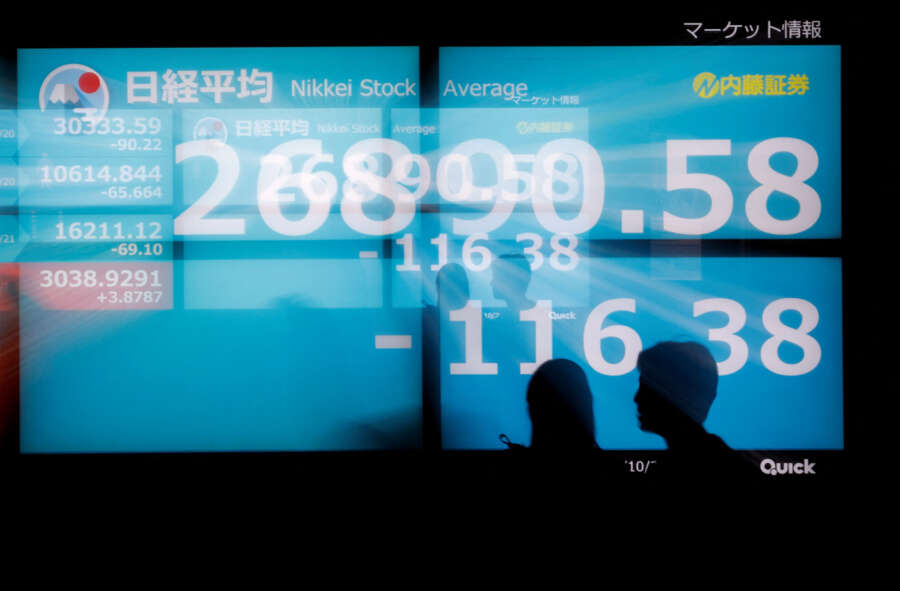 SINGAPORE (Reuters) – Asian shares rose and the dollar wobbled on Wednesday as investors awaited U.S. inflation data as well as the results of the U.S. midterm elections that could signify a power shift in Washington.

China stocks soared last week on hopes that authorities in the country would relax their zero-COVID policy, but rising COVID-19 cases have tempered expectations.

“Despite all the positive talk about slowly unwinding zero-Covid and experimenting with bigger events, it looks as if more lockdowns might be on their way,” ING regional head of research Robert Carnell said.

On Tuesday, all three major U.S. stock indexes notched their third straight session in the green.

Republicans are widely favoured to pick up the five seats they need to control the House, but control of the Senate could come down to tight races in several states.

A split Congress would diminish the outlook for fiscal support measures, leading to investors to expect the Fed to sooner become less aggressive in raising interest rates, strategists at Saxo Markets wrote. They added that such an outcome could spark an equities rally and would likely put downward pressure on the dollar.

Historically, stocks have tended to do better under a split government when a Democrat is in the White House, with investors attributing some of that performance to political gridlock that prevents either side from making major policy changes.

Initial results showed that several Republican senators had easily won re-election but the final outcome probably will not be known any time soon.

In the crypto world, bitcoin fell nearly 1% on Wednesday after sliding 10% following crypto exchange Binance’s announcement that it had signed a nonbinding agreement on Tuesday to acquire rival exchange FTX in the face of an apparent liquidity crunch.

U.S inflation data scheduled for release on Thursday will also be on investors’ mind, with economists forecasting a decline in both the monthly and yearly core numbers to 0.5% and 6.5%, respectively.

Fed funds futures have priced in a 67% chance of a 50-basis-point rate hike in December, and a 33% probability of a 75-basis-point increase.

In the currency market, the U.S. dollar has been under downward pressure from bets on the Federal Reserve easing back on interest rate rises and on China reopening and driving growth.

Oil prices were mostly unchanged in early trade on Wednesday, after sliding 3% in the previous session on demand worries.