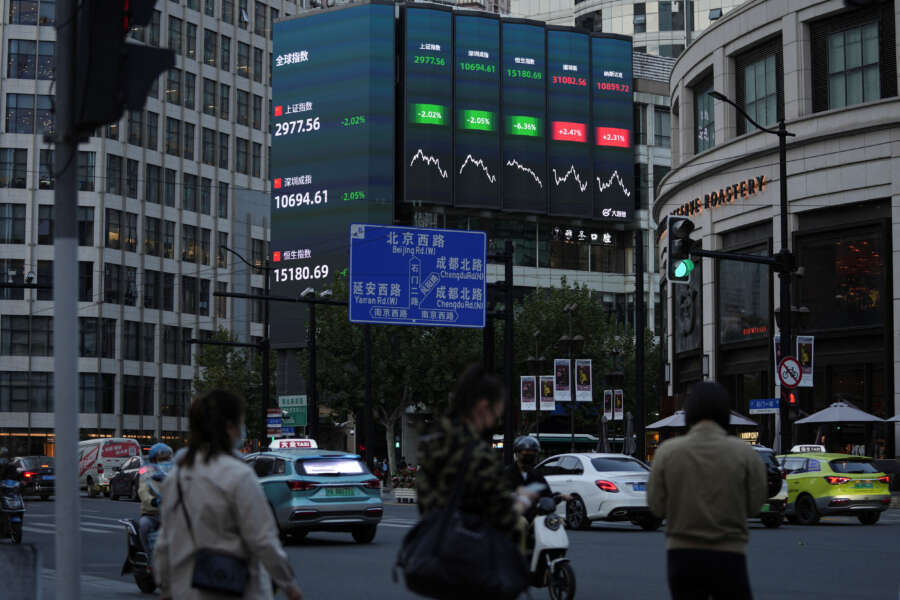 SYDNEY (Reuters) – Asian shares climbed on Wednesday, led by Chinese stocks on reopening hopes, while the dollar sagged as investors braced for the U.S. Federal Reserve’s policy decision later in the day, with many hoping for signs of a slowdown in future rate hikes.

European markets looked set to extend the cautious optimism, with the pan-region Euro Stoxx 50 futures up 0.5%. U.S. S&P 500 futures edged up 0.3% while the Nasdaq futures rose 0.4%.

The world’s biggest central bank is due to release its policy statement at 2 p.m. EDT (1800 GMT) on Wednesday, with investors set to closely scrutinise the statement and comments from Fed Chair Jerome Powell for any signal that policymakers are contemplating tempering rate hikes.

Markets widely expect the Fed to raise its benchmark overnight interest rate by 75 basis points (bps) to a range of 3.75% to 4.00%, the fourth such increase in a row.

However, traders are split on the size of the hike in December, with futures market pricing in a 44.5% probability of a 50-bps increase, according to CME’s Fed tool.

“We suspect Chair Powell will try very hard to avoid saying anything that might be misconstrued as a signal that the inevitable step down in the size of tightening is a pivot toward the end of the tightening cycle,” said Kevin Cummins, chief U.S. economist at NatWest Markets.

“Given that the inflation-related data have yet to show any signs of any moderation, we lean a bit more toward officials holding off from signalling they are reducing the size of hikes just yet.”

Cummins expects the Fed to step down to a 50 bps hike in December.

MSCI’s broadest index of Asia-Pacific shares outside Japan climbed 0.8% after wobbling earlier in the day, with Chinese bluechips and Hong Kong stocks reversing losses on hopes that China will ease its tough zero-COVID restrictions.

An unverified note circulating on social media on Tuesday that China was planning a reopening from strict COVID curbs in March triggered a sharp rebound following last month’s savage selling. But quarantines and business disruptions in China are surging again and some analysts expect no major policy shifts until well into next year or even 2024.

Hong Kong is holding an investment summit on Wednesday to rebuild the COVID-ravaged city’s image as the region’s financial hub, with Chief Executive John Lee pledging it would continue working towards lifting COVID curbs.

Chinese policymakers also reaffirmed their support for Hong Kong and welcomed foreign investors to the city. Hang Seng index surged 2.5%, after a whopping 5.2% in the previous session.

Overnight, a survey showed U.S. job openings unexpectedly rose in September, suggesting that demand for labour remains strong despite rate hikes. That sparked a reversal in Treasury yields and lifted market bets on interest rates to above 5% next year.

In the currencies market, the dollar eased 0.2% against a basket of major currencies. It fell 0.5% against the Japanese yen to 147.6 yen amid fears of intervention from authorities and thin liquidity. [FRX/]

Bank of Japan Governor Haruhiko Kuroda said on Wednesday a tweak to the central bank’s yield curve control policy, which has contributed to the weakness in the yen, could become a future option.

The safe-haven greenback gave up some of the rapid gains this year in October on speculation the Fed might indicate a slowdown in its aggressive tightening campaign.

The dollar’s retreat in foreign exchange markets is temporary, according to a Reuters poll of currency strategists, who said the greenback still had enough strength left to reclaim or surpass its recent highs and resume its relentless rise.

“In the Fed’s view, putting the U.S. into a recession is still a lesser evil than not tackling entrenched price pressures,” said Chris Weston, head of research at Pepperstone.

“My own view is the risks are skewed for a hawkish reaction – USD higher, but I will recognise the moves in rates suggests the market is largely positioned for this outcome.”

U.S. Treasury yields were largely steady on Wednesday after reversing much of the losses overnight on the unexpected strength in the jobs data.

The yield on benchmark ten-year notes was little changed at 4.0422% while the yield on two-year notes eased 4 basis points to 4.5157%.

Gold was slightly higher, with spot price trading at $1649.72 per ounce.