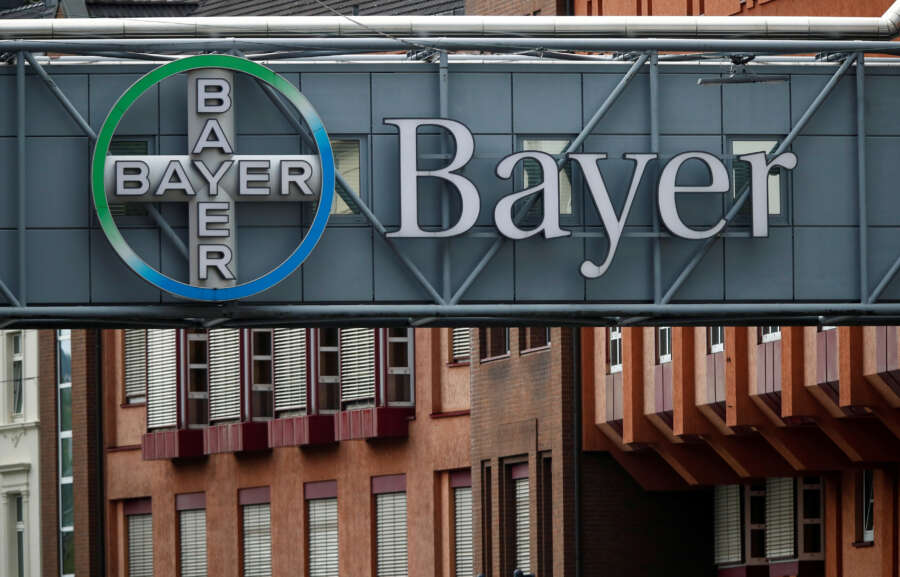 FILE PHOTO: A bridge is decorated with the logo of a Bayer AG, a German pharmaceutical and chemical maker in Wuppertal, Germany August 9, 2019. REUTERS/Wolfgang Rattay
Headlines

FRANKFURT (Reuters) -Agriculture and pharmaceuticals company Bayer on Tuesday reported better-than-expected quarterly earnings as higher prices for glyphosate-based weedkillers made up for a decline in sales of its stroke prevention pill Xarelto.

“We expect them to normalize further in the fourth quarter,” he said.

Bayer said its full-year outlook issued in August still stood, but it added that cost inflation would continue next year. The shares fell 2.3%, erasing gains over the previous two trading sessions as analysts voiced concerns over the cost outlook.

Bayer has been hit by litigation costs over cancer claims by mostly individual users of glyphosate-based weedkiller. But demand for the product class from farmers, the crop science unit’s main customer group, has not been dented by the legal disputes.

It said in August it was targeting adjusted EBITDA of about 13 billion euros, based on June 30 foreign exchange rates, up from 11.2 billion in 2021.

Its best-selling drug Xarelto saw sales decline 6.2% to 1.11 billion euros in the quarter, slightly below market estimates, on lower prices and volumes in China as well as loss of patent protection in Brazil.

Revenues from anti-blindness treatment Eylea rose 6.3% to 811 million euros, gaining prescriptions in Europe and China, but also came in slightly below expectations.