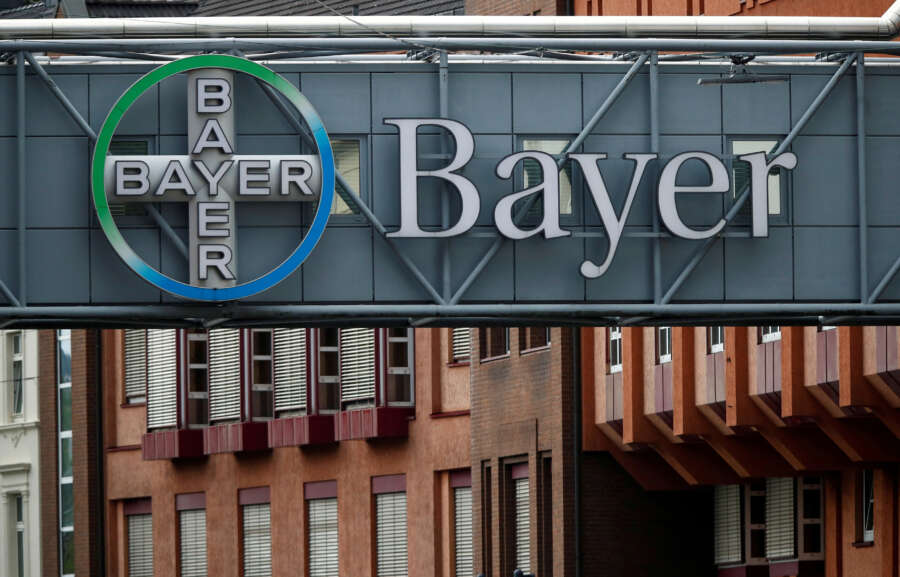 FILE PHOTO: A bridge is decorated with the logo of a Bayer AG, a German pharmaceutical and chemical maker in Wuppertal, Germany August 9, 2019. REUTERS/Wolfgang Rattay
Headlines

By Ludwig Burger and Patricia Weiss

FRANKFURT (Reuters) -Bayer is facing demands from activist investor Bluebell Capital Partners to break up, a person familiar with the matter told Reuters, pushing shares in the diversified health and agriculture group to a five-week high.

The source said Bluebell had invested in Bayer a few months ago and is pushing for a sale of the company’s consumer health unit and, at a later stage, for a separation of Bayer’s pharmaceuticals and agriculture businesses.

Bluebell is also seeking to have supervisory board Chairman Norbert Winkeljohann and Chief Executive Werner Baumann replaced, the person said.

The German industrial icon has seen its market value slide in the wake of its 2018 takeover of Monsanto.

Bayer’s stock was up 3% at 1016 GMT, for a sixth consecutive trading session of gains. Bluebell’s investment was first reported by Bloomberg late on Tuesday.

A Bayer spokesperson said the company was open in general for constructive dialogue with stakeholders and declined to comment further.

Bluebell, launched three years ago, has a history of challenging the policies and executives of some of the world’s biggest companies, including GSK, Glencore and Vivendi <VIV.PA >, while owning very small stakes.

It was instrumental in the ouster of the boss of French food giant Danone in 2021 and recently has been campaigning for BlackRock CEO Larry Fink to quit, in part because of the fund giant’s environmental, social and governance (ESG) efforts.

Bayer CEO Werner Baumann, who shortly after his promotion in 2016 started pursuing the troubled Monsanto deal, was given a new contract in 2020 and said at the time he would leave the company when that term expires in 2024.

Markus Manns, a portfolio manager at top-10 Bayer shareholder Union Investment, said it would be the responsibility of a new chief executive to review the company structure.

“It’s too early for a break-up but the separation of consumer health would be an obvious way to create additional value,” said Manns, adding that Union Investment was not in contact with Bluebell.

The upswing in Bayer shares this week, fuelled by the prospect of billions in additional sales from its drug development pipeline, has done little to change the bigger picture of years of market underperformance.

The stock has been weighed down by litigation over weedkiller Roundup and over environmental pollution with chemicals known as PCBs, which are legacy issues from the takeover of Monsanto for more than $60 billion in 2018.

Despite strong demand for its farming products, improved prospects of its pharmaceuticals business and a number of recent courtroom victories for the German group, the company is valued at 53 billion euros ($57 billion) on the stock market, well below the price tag for Monsanto.