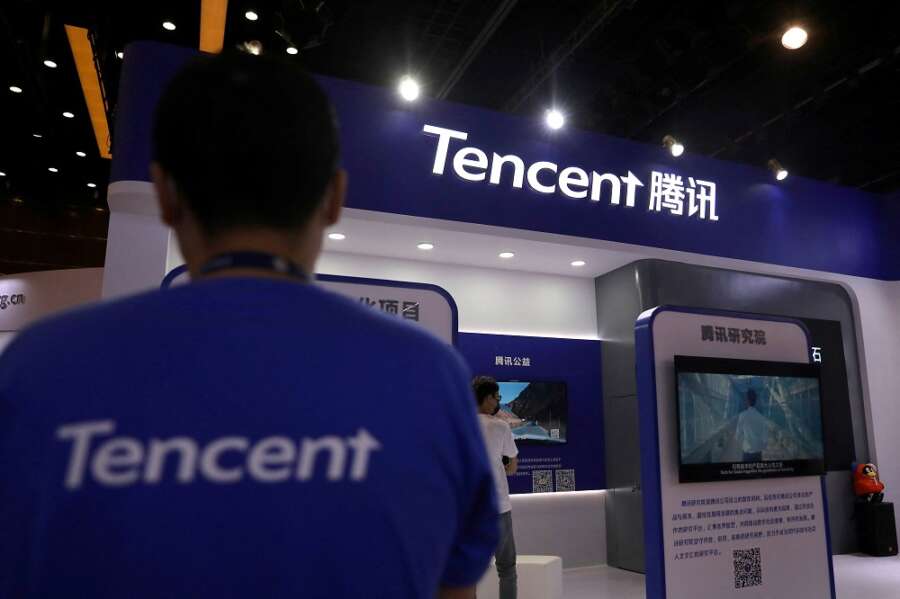 FILE PHOTO: A staff member is seen at a booth of Tencent at an exhibition during China Internet Conference in Beijing, China July 13, 2021. REUTERS/Tingshu Wang
Headlines

HONG KONG (Reuters) -China’s Tencent Holdings suffered its first ever quarterly sales fall on Wednesday, hurt by a government clampdown on game approvals and playing time as well as COVID-19 lockdowns and a weakening economy that squeezed ad sales. The contraction marks a nadir for the gaming giant and owner of the WeChat messaging platform which has reported double digit growth almost every quarter since it went public in 2004, as Beijing’s crackdown on big tech companies that began in late 2020 puts the brakes on its expansion. Tencent plans to sell all or a bulk of its $24 billion stake in food delivery firm Meituan to placate domestic regulators, Reuters reported on Tuesday. The company said on Wednesday revenue declined 3% to 134 billion yuan ($19.78 billion) for the three months ended June 30 from 138.3 billion yuan a year earlier. It has fallen for two straight quarters and analysts were anticipating the decline.

China cut key lending rates on Monday to revive demand as data showed a slowdown in July, indicating the world’s second-largest economy is struggling to shake off the second quarter’s hit to growth from strict COVID restrictions.

E-commerce giant Alibaba Group Holding Ltd, reported earlier this month flat quarterly revenue growth for the first time in its history. Tencent has been reducing holdings in portfolio companies partly to appease the Chinese regulators and partly to book its hefty profits on those bets, according to sources. The Shenzhen-based giant has lost nearly 60% of its market value since it peaked in February 2021 following Beijing’s regulatory crackdown to rein in the influence of large internet firm. However the $373 billion company has held onto its crown as China’s most valuable company.

Revenue from online games, Tencent’s big profit driver, decreased both at home and abroad, with each declining by 1%. Tencent has yet to receive a new game license from Chinese regulators after they temporarily halted approvals.

Its social network services reported a 1% increase in revenue as WeChat earned more from its video content.

“In the short term, that may be its biggest growth driver,” Shawn Yang, manager director of Blue Lotus Capital Advisor said, referring to WeChat video revenue.

Tencent reported 18.6 billion yuan ($2.74 billion) in revenue for ads in the second quarter, down by 18%, as advertisers remain cautious with their budgets, but not as bad as some analysts had anticipated, according to Yang.

Revenue growth from the company’s fintech and business services, slowed to 1% to 42.2 billion yuan ($6.22 billion) due to the impact of lockdowns on business activities.

“Results are quite weak, but an even worse scenario had been priced into the stock price prior to the earnings,” said Charlie Chai, an analyst with 86Research.