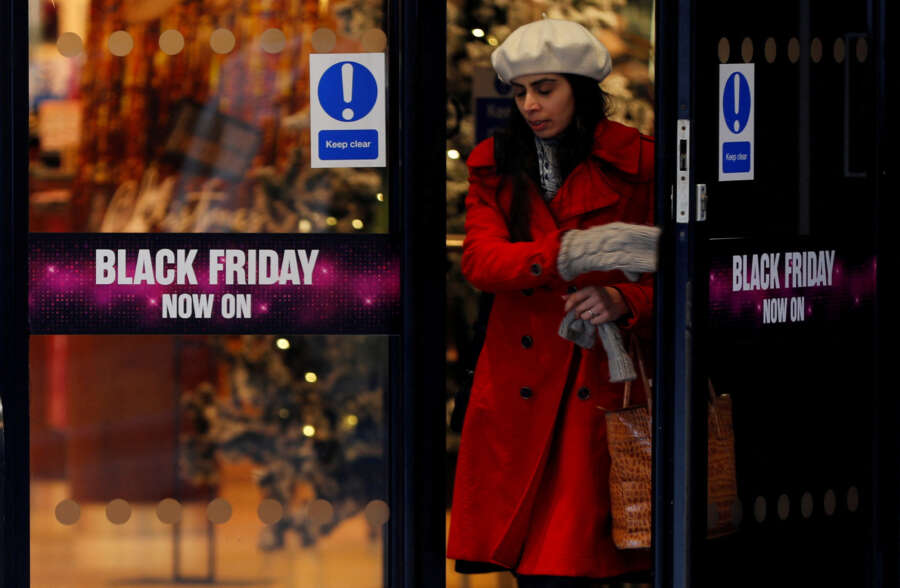 LONDON (Reuters) -Europe’s retailers are hoping Black Friday discount day will get shoppers spending, though it takes place against a backdrop of a worsening cost-of-living crisis and the distraction of the soccer World Cup.

Retailers across Europe fear the overall Christmas trading season could be the worst in at least a decade as shoppers cut back, while the costs of doing business show no sign of abating, squeezing profit margins.

Double-digit inflation has dented consumers’ purchasing power and their confidence is also at or close to the gloomiest on record as soaring energy bills add to the spiralling cost of living.

But to help budget their finances, consumers have begun their Christmas shopping early this year and many still look set to shop on Black Friday.

Some consumers may, however, have other priorities, with Wales, England, the Netherlands and Poland all in action on Friday at the World Cup.

Britons will spend 8.7 billion pounds ($10.5 billion) over the Black Friday weekend (Nov. 25 to Nov. 28), according to research by GlobalData for VoucherCodes – up 0.8% year-on-year but masking a big drop in volumes once inflation is accounted for.

This year, consumers will use Black Friday, which has become more of an online event, much more for jumping on spontaneous deals and for Christmas gifts, rather than for bigger, delayed purchases, according to consultants McKinsey.

Its research shows a quarter of UK consumers have already done their Christmas shopping, while about one in 10 is planning to do most of it on Black Friday.

Idealo, the European price comparison portal, said 65% of online Italian shoppers are ready to buy a product during the event.

In France, 70% plan to shop on Black Friday and Cyber Monday, according to research by PwC France.

However, the Spanish are less keen, with just 24% of shoppers planning to take advantage of Black Friday deals to get a head start on their Christmas shopping, according to the Spanish Association of Mass Consumer Goods Companies.

In the United States, the National Retail Federation (NRF) has forecast holiday sales would rise at a slower pace this year, while Amazon has forecast its slowest revenue growth for any holiday period in years.

Some major retailers, including Marks & Spencer, largely shun the event.

More than a decade since being brought to Europe by Amazon, Black Friday’s worth to retailers still divides opinion.

(Reporting by James Davey in London; Additional reporting by Giselda Vagnoni in Rome, Dominque Vidalon in Paris and Corina Rodriguez in Madrid; Editing by David Holmes and Kim Coghill)