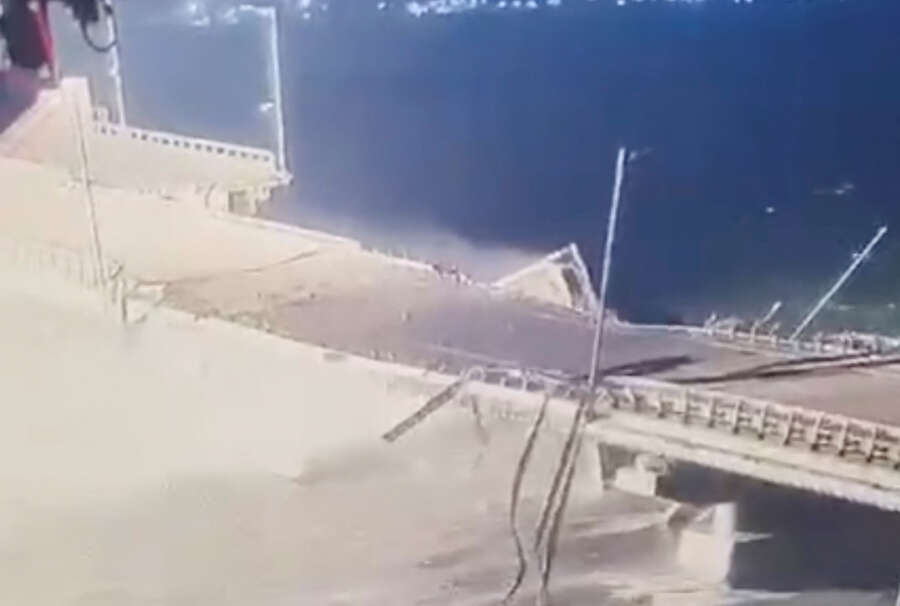 FILE PHOTO: CCTV footage of a collapsed traffic lane is displayed on a monitor, after a freight truck detonated on the strategic road-and-rail Kerch bridge linking Russia and the Crimea peninsula, October 8, 2022 in this video still image obtained by REUTERS
Headlines

Crimea bridge blast: why is bridge important and what happened to it

LONDON (Reuters) – The road-and-rail bridge linking Russia and the Crimean peninsula was damaged in a powerful blast on Saturday, hitting a crucial supply route for Russian forces in Ukraine.

Russian officials said the explosion was caused by a truck that blew up while crossing the bridge, killing three people.

President Vladimir Putin has branded the blast a “terrorist attack” orchestrated by Ukrainian security services and on Monday he ordered a wave of retaliatory strikes on Ukrainian cities including the capital Kyiv.

Following are key facts about the bridge.

The 19-km (12-mile) Crimea Bridge over the Kerch Strait is the only direct link between the transport network of Russia and the Crimean peninsula, which Moscow annexed from Ukraine in 2014.

The bridge was a flagship project for Putin, who opened it himself for road traffic with great fanfare by driving a truck across in 2018.

It consists of a separate roadway and railway, both supported by concrete stilts, which give way to a wider span held by steel arches at the point where ships pass between the Black Sea and the smaller Azov Sea.

The structure was built, at a reported cost of $3.6 billion, by a firm belonging to Arkady Rotenberg, a close ally and former judo partner of Putin.

The bridge is crucial for the supply of fuel, food and other products to Crimea, where the port of Sevastopol is the historic home base of Russia’s Black Sea Fleet.

It also became a major supply route for Russian forces after Moscow invaded Ukraine on Feb. 24, sending forces from Crimea to seize most of southern Ukraine’s Kherson region and some of the adjoining Zaporizhzhia province.

Russia’s Defence Ministry said on Saturday that those troops could be fully supplied by existing land and sea routes.

WHAT HAS BEEN DESTROYED

Traffic was initially suspended after the incident but by Saturday evening cars and buses were allowed to start crossing the bridge in alternating directions on the remaining intact lanes, while heavy goods vehicles waited to cross by ferry.

The span through which ships pass the strait was not damaged.

WHO TARGETED THE BRIDGE?

Putin has said it “is obvious that the Ukrainian secret services ordered, organised and carried out the terrorist attack” on the bridge.

Ukraine has not claimed responsibility for the blast on the bridge but has celebrated it.

The New York Times newspaper, citing a senior Ukrainian official who spoke on condition of anonymity, reported that Ukraine’s intelligence services had been behind the blast.

(This story has been refiled to update headline)