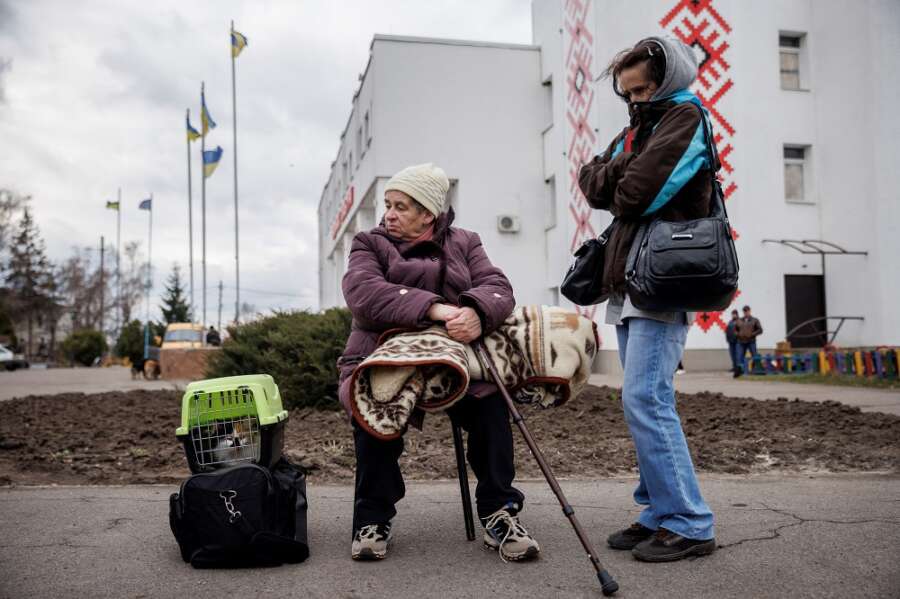 DERHACHI, Ukraine (Reuters) – Dragging trolleys and clutching plastic bags with their meagre belongings, residents of the northeastern Ukrainian town of Derhachi, near the border with Russia, boarded buses on Wednesday to be evacuated as fears of a Russian assault grew.

Since pulling back from outside the capital Kyiv last week, Russian forces have shifted their assault towards Ukraine’s south and east.

Ukraine’s general staff said the northeastern city of Kharkiv, the country’s second-largest, remained under attack on Wednesday, and authorities expect Russian forces to launch a full-blown assault soon to try to take the city.

Many in the town of Derhachi, which lies just north of Kharkiv and 30km (19 miles) from the border with Russia, have decided to leave while they can. Buildings have already been badly damaged by Russian artillery.

“The shelling has intensified in recent days. I am very worried for my children,” said Mykola, a father of two who declined to give his surname, hugging his young son who was keeping warm under a fleece blanket.

He said he could hear the thud of bombardments every night, and had been hunkering down with his family in the corridor of their home.

“(We’ll go) wherever there are no explosions, where the children won’t have to hear them. I want it to be over as soon as possible,” he said, struggling to hold back tears.

At least eight buses and vans left the town on Wednesday in an evacuation organised by the International Committee of the Red Cross towards the city of Poltava, some 150 km to the west. A family with a dog, a mother cuddling her baby, an elderly woman with a cane waited patiently for their turn to leave.

“It is unbearable, it is terrifying. Everything is shaking, the glass of the windows has been blown out,” said Nina, a middle-aged woman whose daughter had already left.

She said the balcony of her house had been hit by shelling and that she had sought shelter in the bathroom and in the basement.

Another woman, Iryna, said: “I don’t want to go, I leave everything behind. But there is no other choice.”

Even the interior of the church had been pockmarked by shrapnel and the town hall was destroyed. Nearby stood a World War Two memorial plate honouring Soviet forces who liberated Derhachi from Nazi occupiers on August 12, 1943.

Mayor Viacheslav Zadorenko, who stayed behind, said he had no information about a build up of Russian troops preparing to attack.

“Our armed forces defend the town, therefore, there is no reason for panic,” he told Reuters, adding, however, people should be taking no chances given reports of atrocities at the hands of Russian occupiers in the region around Kyiv before Ukrainian troops retook control.

“Taking into account the events in Bucha, Hostomel, we should probably evacuate as many people as possible to save their lives,” he said.

Ukrainian authorities have accused Russian forces of killing civilians in Bucha and other nearby towns, where Reuters reporters saw bodies of people shot dead at close range, some with their hands tied behind their backs.

The Kremlin dismisses the allegations as propaganda. Russia’s U.N. Ambassador Vassily Nebenzia told the Security Council on Tuesday that Russian troops are not targeting civilians, dismissing accusations of abuse as lies. He said that while Bucha was under Russian control “not a single civilian suffered from any kind of violence.”

No poop for you: Manure supplies run short as fertilizer prices soar

Finland, Sweden to send teams to Turkey to...