Home Headlines Europe’s alternatives if Russia shuts off gas supply
Our website publishes news, press releases, opinion and advertorials on various financial organizations, products and services which are commissioned from various Companies, Organizations, PR agencies, Bloggers etc. These commissioned articles are commercial in nature. This is not to be considered as financial advice and should be considered only for information purposes. It does not reflect the views or opinion of our website and is not to be considered an endorsement or a recommendation. We cannot guarantee the accuracy or applicability of any information provided with respect to your individual or personal circumstances. Please seek Professional advice from a qualified professional before making any financial decisions. We link to various third-party websites, affiliate sales networks, and to our advertising partners websites. When you view or click on certain links available on our articles, our partners may compensate us for displaying the content to you or make a purchase or fill a form. This will not incur any additional charges to you. To make things simpler for you to identity or distinguish advertised or sponsored articles or links, you may consider all articles or links hosted on our site as a commercial article placement. We will not be responsible for any loss you may suffer as a result of any omission or inaccuracy on the website.
Headlines 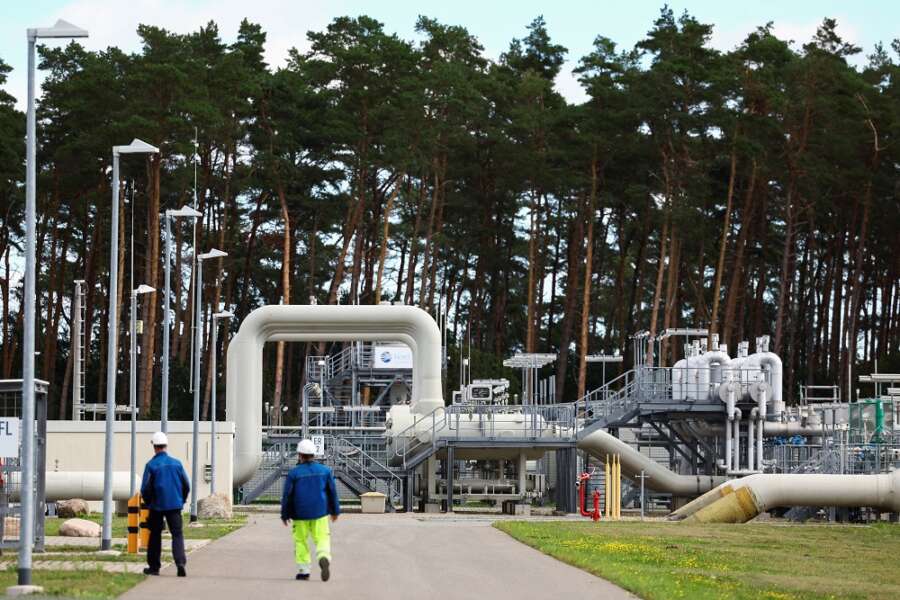 Gazprom was already undergoing maintenance from Aug. 31-Sept. 2, prompting concerns about supply to Europe ahead of the onset of winter if the outage was extended.

Russia slashed flows through the pipeline to 40% of capacity in June and to 20% in July.

It has also cut off supply to several European countries such as Bulgaria, Denmark, Finland, the Netherlands and Poland, and reduced flows via other pipelines since launching what Moscow calls its “special military operation” in Ukraine.

WHAT ARE THE MAIN ROUTES FOR RUSSIAN GAS TO EUROPE?

Via Ukraine the gas goes mainly to Austria, Italy, Slovakia and other east European states. The Ukrainian transmission system operator has declared force majeure at the Sokhranovka entry point pipeline that runs through Russian-occupied territory in the east of the country.

Ukraine’s state-owned energy company Naftogaz has said it is working to increase natural gas production, and could supply gas to European countries in time for next year’s heating season.

European countries have been seeking to find alternative supply, including some cut off by Russia after rejecting a demand they pay in roubles.

Others, including Germany, still need Russian gas and are trying to refill gas storage ahead of winter.

Alternative routes to Europe that do not go via Ukraine include the Yamal-Europe pipeline, which crosses Belarus and Poland to Germany.

The Yamal-Europe pipeline has a 33 billion cubic metre (bcm) capacity, around a sixth of Russian gas exports to Europe. Flows have been reversed to flow eastward between Poland and Germany since the start of this year.

Moscow has placed sanctions on the owner of the Polish part of the Yamal-Europe pipeline. However, Poland can manage without reverse gas flow on the Yamal pipeline, its climate minister has said.

On Nord Stream 1, the Kremlin has blamed Western sanctions for a delay in the return of equipment sent for maintenance to Canada.

Some countries have alternative supply options and Europe’s gas network is linked up so supplies can be shared, although the global gas market was tight even before the Ukraine crisis.

Germany, Europe’s biggest consumer of Russian gas, which has halted certification of the new Nord Stream 2 gas pipeline from Russia because of the Ukraine war, could import from Britain, Denmark, Norway and the Netherlands via pipelines.

Norway, Europe’s second biggest gas supplier behind Russia, has been raising production to help the European Union towards its target of ending reliance on Russian fossil fuels by 2027.

Britain’s Centrica has signed a deal with Norway’s Equinor for extra supply for the next three winters. Britain does not rely on Russian gas and can also export to Europe via pipelines.

Southern Europe can receive Azeri gas via the Trans Adriatic Pipeline to Italy and the Trans-Anatolian Natural Gas Pipeline (TANAP) through Turkey.

The United States has said it can supply 15 bcm of liquefied natural gas (LNG) to the European Union this year.

But U.S. LNG plants are producing at full capacity and a blast at a major LNG export terminal in Texas will keep it idle until late November.

Europe’s LNG terminals also have limited capacity for extra imports, although some countries say they are seeking ways to expand imports and storage.

Germany is among those who want to build new LNG terminals. It plans to build five.

Poland, which relies on Russia for about 50% of its gas consumption or around 10 bcm, has said it can source gas via two links with Germany. A new pipeline allowing up to 10 bcm of gas per year to flow between Poland and Norway will be opened in October. A new gas link between Poland and Slovakia was also commissioned last week.

Spain wants to revive a project to build a third gas connection through the Pyrennes mountains but France has said new LNG terminals, which can be made to float, would be a quicker and cheaper option than a new pipeline.

OTHER OPTIONS TO COPE WITH A GAS SUPPLY CRUNCH?

Several nations can seek to fill any gap in energy supplies by turning to electricity imports via interconnectors from their neighbours or by boosting power generation from nuclear, renewables, hydropower or coal.

Nuclear availability is falling in Belgium, Britain, France and Germany with plants facing outages as they age, are decommissioned or phased out. Hydro levels have been falling this summer due to low rainfall and a heatwave.

Europe has been trying to shift from coal to meet climate targets but some plants have been switched back on since mid-2021 because of surging gas prices.

Energy ministers agreed that all EU countries should voluntarily cut gas use by 15% from August to March, compared with their average annual use during 2017-2021 and introduced EU-wide targets for refilling gas storage.

Germany has triggered stage two of its three-stage emergency gas plan and urged businesses and consumers to save gas to avoid forced rationing.

The Dutch energy minister has said its Groningen field could be called upon to help neighbouring countries in the event of a complete cut-off in Russian supply but ramping up production would risk causing earthquakes.