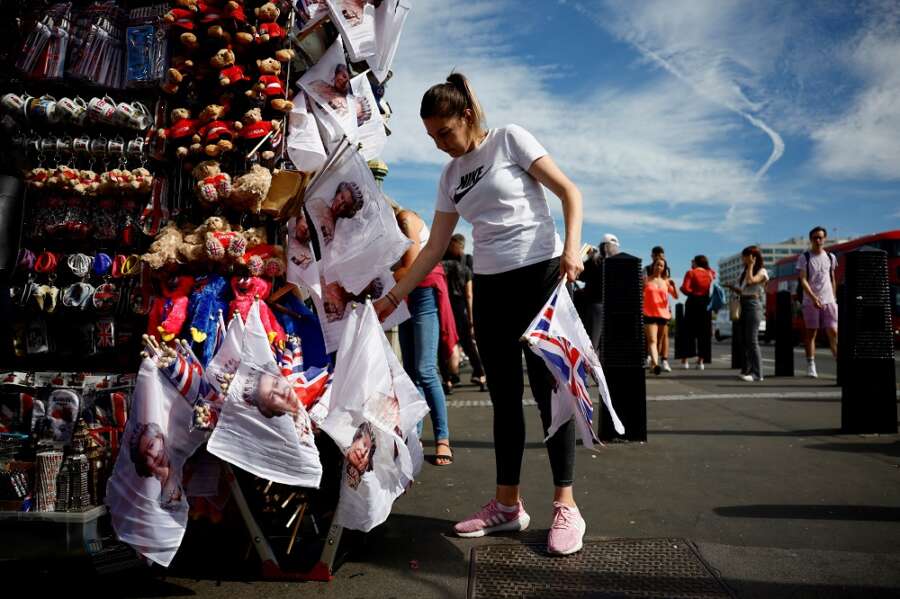 A woman puts flags with the picture of Britain's Queen Elizabeth on display, following the death of the Queen, in London, Britain September 12, 2022. REUTERS/Sarah Meyssonnier
Headlines

Explainer-How will the public be able to say goodbye to Queen Elizabeth?

LONDON (Reuters) – The body of Britain’s Queen Elizabeth will lie in state inside Westminster Hall for the public to pay their respects before her funeral on Monday, Sept. 19.

Below is a look at the arrangements and the lying-in-state tradition.

WHAT IS LYING IN STATE?

The body of a deceased person of significance is placed in a public building to allow the public to pay their respects.

In Britain, this usually happens in Westminster Hall, built in the year 1097 in the Palace of Westminster where the Houses of Parliament are located.

Lying-in-state is a rare honour in Britain, previously accorded only nine other times, mostly for royal family members, including Queen Elizabeth’s mother in 2002.

The three occasions on which non-royals were lain in state were the deaths of former British prime ministers William Gladstone and Winston Churchill as well as the victims of an airship crash in 1930.

Plaques on the floor of Westminster Hall mark the exact locations where previous lyings-in-state were held.

LYING IN STATE FOR QUEEN ELIZABETH

During the lying-in-state period, Queen Elizabeth’s closed coffin will rest on a catafalque – a raised, decorated platform used to support it – inside Westminster Hall.

Each corner of the platform is guarded around the clock by units from the Sovereign’s Bodyguard, Foot Guards or the Household Cavalry Mounted Regiment.

The government is preparing for a very long queue, with hundreds of thousands of people expected to attend.

“You will need to stand for many hours, possibly overnight, with very little opportunity to sit down as the queue will be continuously moving,” the government said in an advisory note.

Visitors will go through airport-style security and there are tight restrictions on what people will be allowed to take in. Only one small bag per person is permitted.

Prohibited items include food and liquid of any kind, banners, placards, flowers or other tribute items including teddy bears. The public is also advised to dress “appropriately” for the occasion and not take any pictures.

The Times reported that some 10,000 police officers will be deployed in London and army bomb disposal teams will be on standby. Police are on alert not just for terrorism-related incidents but for protesters such as environmental activists.

A spokesman for British Prime Minister Liz Truss said up to 1,500 soldiers would be on hand to assist. Rail operators have suggested people should walk if they can avoid the network.

HISTORY OF THE PRACTICE

The tradition has been around since antiquity. In England, the dead bodies of all classes of people were prepared, dressed and “laid out” in an open coffin for a few days while the burial was being arranged. Friends and relations of the deceased would use this period to pay their respects.

“In part, the delay between death and burial, which gave rise to this practice, is said to derive from the need to confirm that death had actually occurred, and that the corpse would not again spring to life,” a House of Commons note says.

WHO ELSE HAS LAIN IN STATE AT WESTMINSTER HALL?

The first lying-in-state was that of former British Prime Minister William Gladstone in 1898, attended by some 250,000 people.

The House of Commons cited an account from the time as saying: “It can hardly be called ‘in state’ – so plain, even to bareness was the whole scene – a plain oak coffin on a kind of altar covered with a black cloth.”

Besides Gladstone, lyings-in-state for so-called commoners were held on only two other occasions: the death of Britain’s wartime Prime Minister Winston Churchill in 1965 and for victims of the R101 airship disaster in 1930.