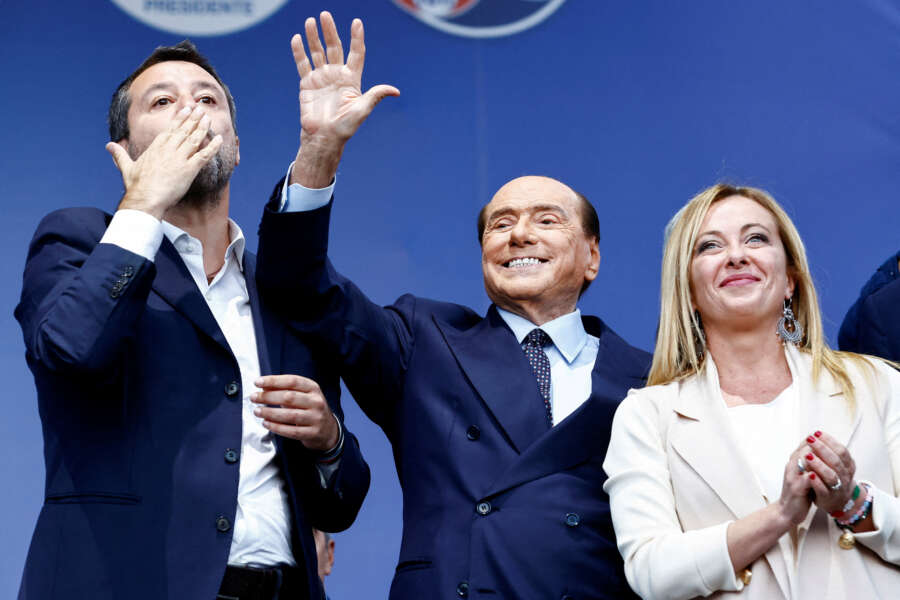 ROME (Reuters) – Italy votes in a national election on Sunday that could herald its most right-wing government since World War Two, led by its first woman prime minister.

Polls are not published in the two weeks before the vote. Before then they had consistently shown that a rightist coalition led by the nationalist Brothers of Italy party and also involving the League party and Forza Italia was on course for a clear victory.

Brothers of Italy leader Giorgia Meloni would be the likely choice for prime minister as head of the main coalition party.

There has been speculation during the poll blackout that the League has fallen back while support for the left-leaning 5-Star Movement has risen.

WHAT WILL BE DECISIVE?

Brothers of Italy has seen a surge in its support after it remained outside Draghi’s government. The League, led by Matteo Salvini, and Silvio Berlusconi’s Forza Italia were both part of the government and their support has slipped.

The right has been helped by divisions in the centre-left where attempts by the main Democratic Party (PD) to form a broad electoral alliance fell apart.

That has left three main groups in the centre or centre-left fighting for votes – the PD and its allies; the centrist Azione party and its Italia Viva partner; and finally 5-Star.

WHAT ARE THE MAIN ISSUES FOR VOTERS?

As in other European countries, the cost of living crisis has overshadowed other concerns such as immigration, pensions and public services.

The conservative alliance has called for tax cuts across the board to help Italians cope with rising prices, while the PD wants tax reductions to be targeted towards lower income groups.

5-Star has championed a popular “citizens’ wage” poverty relief scheme it introduced while in government.

Meloni has voiced her support for Western policy against Russia after it invaded in Ukraine. Salvini has called for the European Union to shield Italians from the economic side-effects of sanctions imposed on Russia over the invasion.

Berlusconi sparked controversy on Friday when he defended Putin, saying he was “pushed” into the war on Ukraine and only wanted to install a government of “decent people” in Kyiv.

WHO ARE THE KEY PLAYERS?

Meloni, 45. A former youth minister, she has energised her party, which has post-fascist roots and is set to see its share of the vote leap to around 25% from only 4% at the last election in 2018.

Salvini, 49. An abrasive former interior minister, who takes a hard line on immigration but has made a series of political blunders over the past three years and has been eclipsed by Meloni.

Berlusconi, 85. A former prime minister has shrugged off ill health and scandal to remain a major player in the rightist alliance, even if his Forza Italia is the junior partner now among its three main parties.

Enrico Letta, 56. PD leader, and another former prime minister. His failure to build a stable coalition of centre-left parties has left him facing political defeat.

Giuseppe Conte, 58. Leader of the 5-Star Movement. Prime minister from 2018-21, he provoked anger when his party withdrew support for Draghi’s government in July, sparking divisions that led to the early election.

Almost 51 million Italians are eligible to vote, of whom 4.7 million live abroad.

Voters will be electing a slimmed-down parliament with the number of seats in the lower house cut to 400 from 630, while the Senate goes to 200 seats from 315.

WHAT TO WATCH FOR?

The first hurdle for the rightist alliance will be to gain a majority in both houses. That appeared to be a near-certainty when the last polls were taken but a recovery in support for the 5-Star Movement in the south could make it more difficult to achieve in the upper house, the Senate.

A majority of more than two-thirds would clear the way for parliament to make changes to the constitution without putting them to a referendum.

Parliamentarians elected in foreign constituencies could swing the balance in a tight contest — there are eight such seats up for grabs in the lower house and four in the Senate.

Coalition formation in Italy is notoriously slow, but the prospect of a more clear-cut result means there is unlikely to be a repeat of 2018 when it took almost three months.

The new parliament will convene on Oct. 13. After that date, President Sergio Mattarella can start consultations with party leaders to discuss the new government.