Home Headlines German bonds set for worst month in decades as inflation hits new highs
Our website publishes news, press releases, opinion and advertorials on various financial organizations, products and services which are commissioned from various Companies, Organizations, PR agencies, Bloggers etc. These commissioned articles are commercial in nature. This is not to be considered as financial advice and should be considered only for information purposes. It does not reflect the views or opinion of our website and is not to be considered an endorsement or a recommendation. We cannot guarantee the accuracy or applicability of any information provided with respect to your individual or personal circumstances. Please seek Professional advice from a qualified professional before making any financial decisions. We link to various third-party websites, affiliate sales networks, and to our advertising partners websites. When you view or click on certain links available on our articles, our partners may compensate us for displaying the content to you or make a purchase or fill a form. This will not incur any additional charges to you. To make things simpler for you to identity or distinguish advertised or sponsored articles or links, you may consider all articles or links hosted on our site as a commercial article placement. We will not be responsible for any loss you may suffer as a result of any omission or inaccuracy on the website.
Headlines

LONDON (Reuters) – Germany’s borrowing costs rose to their highest level in over two months on Wednesday, and were set to end August with their biggest monthly surge in over 30 years, as data showed inflation in the euro area hitting another record high.

Bond markets across Europe have been battered this month as surging gas prices, fueled by concerns about supplies from Russia, exacerbated inflation fears and pushed up expectations for higher interest rates even as recession fears grow.

Significantly, closely-watched underlying price growth, which filters out volatile food and energy prices, jumped to 5.5% from 5.1%.

“The most disappointing aspect of the inflation data is the core measure, where we have a bigger increase than in the headline measure,” said Chris Scicluna, head of economic research at Daiwa Capital Markets.

“Even though we will get more support measures to help ease the gas crisis, inflation will move higher unless policymakers can get a better grip on gas markets in the euro area.”

In a sign of the scale of the unease gripping investors, bond markets were set to end August with heavy price losses that have sent yields soaring.

In Germany, the euro zone’s benchmark bond issuer, two-year yields rose to their highest since mid-June at around 1.2% and were last up 3 basis points on the day.

They are up around 90 basis points for the month, set for its biggest monthly gain since 1981, according to Refinitiv data.

Germany’s 10-year bond yield was poised for its biggest monthly jump since 1990, up over 70 basis points. It rose to its highest in just over two months at around 1.55%.

While gas prices have come off their peaks, they are still up 30% in August alone.

Russia meanwhile halted gas supplies via a major pipeline to Europe on Wednesday, intensifying an economic battle between Moscow and Brussels and raising the prospects of recession and energy rationing in some of the region’s richest countries.

“Front-end rates are very much dancing to the energy market’s tune and this is what propelled them higher in August,” said ING senior rates strategist Antoine Bouvet.

“Clearly the volatility in the gas and power markets is spilling over into bonds,” said Bouvet. “The ECB, by voicing fear of de-anchoring of inflation expectations, has effectively encouraged greater correlation between bonds and energy.”

The ECB meets next week and is expected to hike rates by at least half a percentage point. 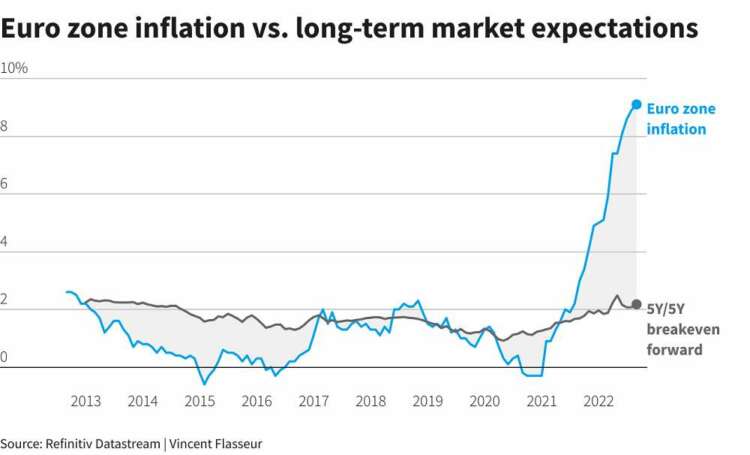