Home Headlines Germany’s gas crisis in charts: Pipeline repair, and then what?
Our website publishes news, press releases, opinion and advertorials on various financial organizations, products and services which are commissioned from various Companies, Organizations, PR agencies, Bloggers etc. These commissioned articles are commercial in nature. This is not to be considered as financial advice and should be considered only for information purposes. It does not reflect the views or opinion of our website and is not to be considered an endorsement or a recommendation. We cannot guarantee the accuracy or applicability of any information provided with respect to your individual or personal circumstances. Please seek Professional advice from a qualified professional before making any financial decisions. We link to various third-party websites, affiliate sales networks, and to our advertising partners websites. When you view or click on certain links available on our articles, our partners may compensate us for displaying the content to you or make a purchase or fill a form. This will not incur any additional charges to you. To make things simpler for you to identity or distinguish advertised or sponsored articles or links, you may consider all articles or links hosted on our site as a commercial article placement. We will not be responsible for any loss you may suffer as a result of any omission or inaccuracy on the website.
Headlines

Germany’s gas crisis in charts: Pipeline repair, and then what?

By Vera Eckert and Tom Sims

FRANKFURT (Reuters) – The flow of gas from Russia to Germany through the Nord Stream 1 pipeline will stop on Monday for a planned 10-day maintenance period. The question is: Will flows then resume?

Germany is largely dependent on Russian gas to fuel its export-led economy and to keep homes warm. But Europe’s largest economy has been bracing for a possible complete halt in Russian supplies if Moscow steps up its use of gas as an economic weapon against the West while it wages war in Ukraine. 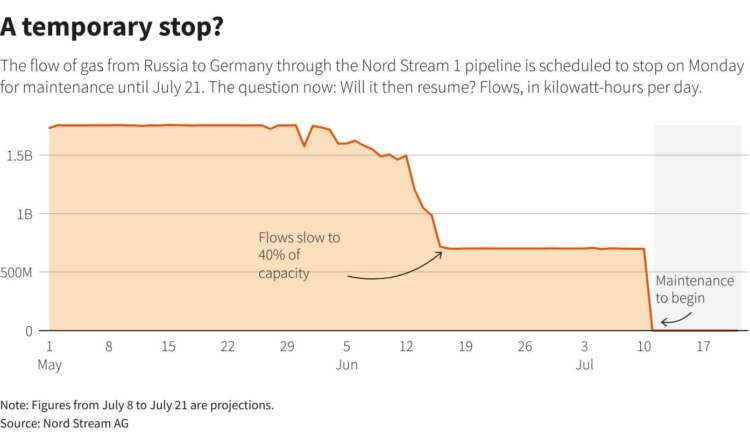 Already down from last year, Russian gas flows slowed even further through the Nord Stream 1 pipeline last month, and Berlin moved to the second of three stages of its supply emergency plan.

Industry executives and economists are scrambling to figure out how Germany will fare in the coming months and beyond, and where it is especially vulnerable.

Germany is known for its cars, and its machine tools fill factories throughout China, but sectors likely to be hardest hit are also its glass and chemicals industries.

1. The Nord Stream 1 pipeline from Russia through the Baltic Sea is the most important direct gas route into Germany. Before the start of maintenance, flows are already down to 40% of capacity, with Russia citing trouble with turbines and sanctions.

There is concern that after the maintenance period the pipeline closes for good.

In that event, storage caverns would not be filled in time for the winter heating season, which is just three months away. 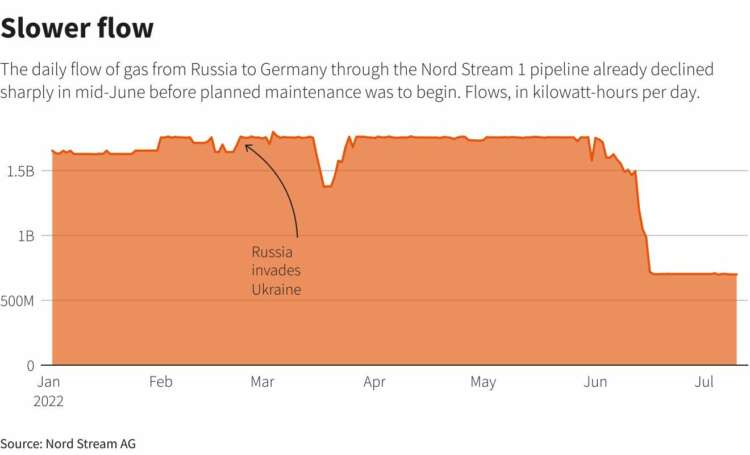 2. It’s not just Germany. Gas flows to Europe are also curtailed via routes linking Russia with Slovakia, the Czech Republic and Austria via Ukraine and on another route through Belarus and Poland. 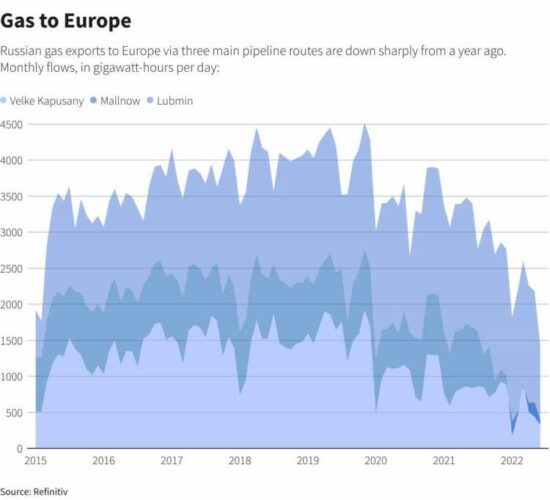 3. Less gas and caps on prices for consumers have put the squeeze on energy suppliers like the German utility Uniper, which is in talks with the government about a possible bailout.

Uniper’s plight is so far the most vivid example of the war’s effect on corporate Germany.

4. German industry, which includes titans like Volkswagen and Siemens, is the biggest consumer of gas, but half of all households, which heat with gas, aren’t far behind.

Emergency plans say homes should be prioritised if the state is forced into rationing, alongside hospitals and essential services, but there are also calls to make households part of savings programmes.

5. Within the industries consuming gas for their processes, Germany’s chemical sector is the biggest single consumer. According to Moody’s, BASF alone uses 4% of Germany’s gas at its Ludwigshafen site.

“In a scenario of reduced gas availability, European chemicals producers could face at least two winters with tight gas supplies,” Moody’s said in a research note, adding costs would go up as well.

Graphic: Gas use by industry https://graphics.reuters.com/UKRAINE-CRISIS/gdpzygnaqvw/chart.png

6. In the grimmest scenario, a complete halt to Russian natural gas exports could cost Germany 12.7% of economic performance in the second half of 2022, according to the Bavarian vbw industry association. That would translate into 193 billion euros ($195.57 billion) in total economic losses.

Germany may be famous for its cars, but the industries that stand to see their activities most curtailed by lack of gas include glass, iron and steel, ceramics, food and printing, with vast knock-on effects to other sectors. 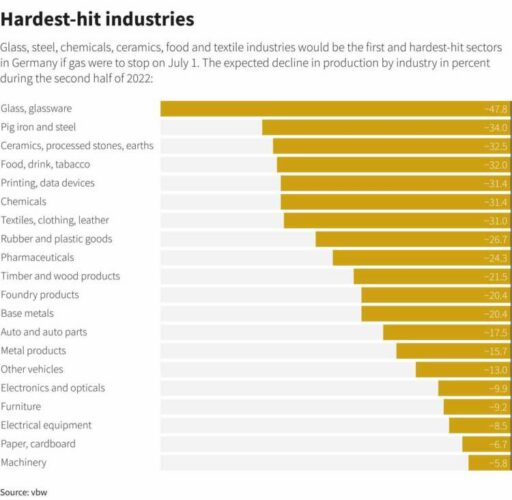