Home Headlines NATO deal with Turkey greeted with caution and concern in Sweden
Our website publishes news, press releases, opinion and advertorials on various financial organizations, products and services which are commissioned from various Companies, Organizations, PR agencies, Bloggers etc. These commissioned articles are commercial in nature. This is not to be considered as financial advice and should be considered only for information purposes. It does not reflect the views or opinion of our website and is not to be considered an endorsement or a recommendation. We cannot guarantee the accuracy or applicability of any information provided with respect to your individual or personal circumstances. Please seek Professional advice from a qualified professional before making any financial decisions. We link to various third-party websites, affiliate sales networks, and to our advertising partners websites. When you view or click on certain links available on our articles, our partners may compensate us for displaying the content to you or make a purchase or fill a form. This will not incur any additional charges to you. To make things simpler for you to identity or distinguish advertised or sponsored articles or links, you may consider all articles or links hosted on our site as a commercial article placement. We will not be responsible for any loss you may suffer as a result of any omission or inaccuracy on the website.
Headlines

NATO deal with Turkey greeted with caution and concern in Sweden 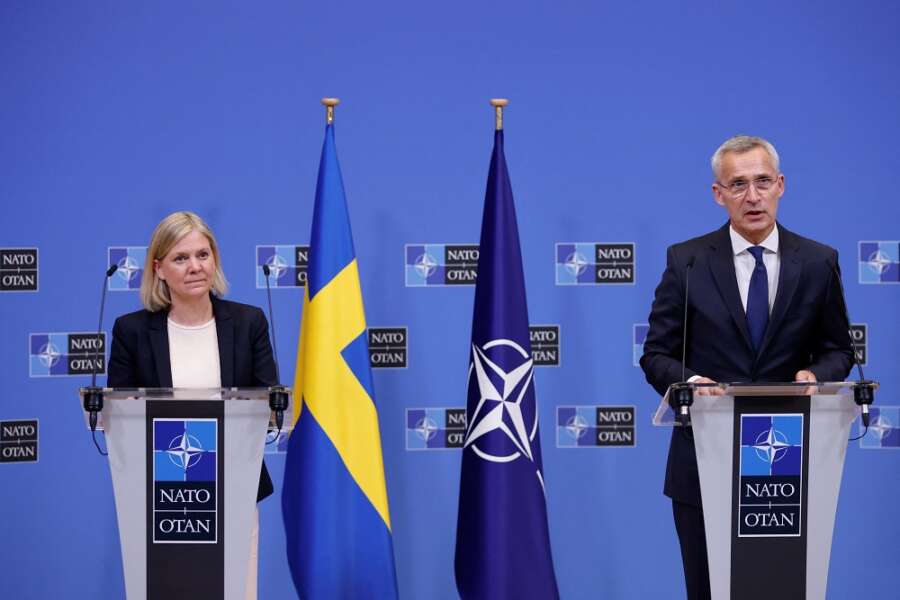 STOCKHOLM (Reuters) – Sweden and Finland took a step closer to joining the NATO military alliance after Turkey’s decision to drop its objections, but there may still be snags to overcome as some critics say the deal hands a foreign policy veto to Ankara.

The three countries reached a breakthrough agreement after more than four hours of talks on the sidelines of the NATO summit in Madrid on Tuesday.

While Sweden and Finland will be given “invitee” status at the Madrid summit, their applications need to be approved by all NATO’s 30 current members, a process that could yet stall.

“Sweden can have problems again with Turkey,” Swedish daily SvD wrote. “Because if Turkey isn’t happy that Sweden is living up to its part of the agreement, the Turkish parliament can stop Sweden again,” the paper said.

“I think we have worked through this so much that we don’t need to be very worried that there will be further problems,” she said. “But it would be unwise of me to say that nothing at all will come up.”

As part of the deal, Sweden and Finland agreed not to support Kurdish militant groups.

Turkish President Tayyip Erdogan had threatened to block their bids over Ankara’s accusations they supported the YPG in northern Syria, which it views as an extension of the outlawed Kurdistan Workers Party (PKK) which is also deemed a terrorist group by the United States and European Union.

Amineh Kakabaveh, an independent Swedish lawmaker and former Kurdish fighter on whom the Social Democrat government has repeatedly relied for its survival in close parliament votes, said it was a “black day for Swedish foreign policy”.

“It also puts a lot of stress on people who have sought asylum and sanctuary in this country, but now no longer feel safe because Sweden is selling away their basic rights,” she said.

She said Linde should appear before the foreign relations committee to explain the deal and threatened to launch a no-confidence motion if she was not satisfied. Such a move would be unlikely to succeed however, as most lawmakers support NATO membership and face an election in September.

Sweden and Finland will also ease weapons export rules and work closely with Turkey on extradition requests for suspects wanted by Ankara.

But what they mean in practice is unclear.

Sweden has insisted it only provides humanitarian aid to Syria and refugees in the surrounding areas.

Linde said that would “naturally continue”, but that Sweden and Finland had agreed not to support militant organizations in northeast Syria in any way that threatened Turkish security, for example with money or weapons.

“But we don’t do that today, either,” she said. She also said that extradition procedures would be unaffected.

“This is according to Swedish law and the agreement with Turkey doesn’t change this,” she said.

Still, there was strong criticism of the deal in Sweden.

Worries have centred on Kurdish dissidents who live in Sweden and Finland and that the deal with make it easier for Erdogan to launch a fresh incursion into northern Syria to recapture towns held by the Kurdish-led Syrian Democratic Forces, which are backed by Washington.

“We warned early on about the dangers of putting Swedish foreign policy in the hands of the despot Erdogan,” Left Party leader Nooshi Dadgostar said on Twitter.

“Are we going to arm Turkey in his war of attack on Syria? Which dissidents will be extradited?”