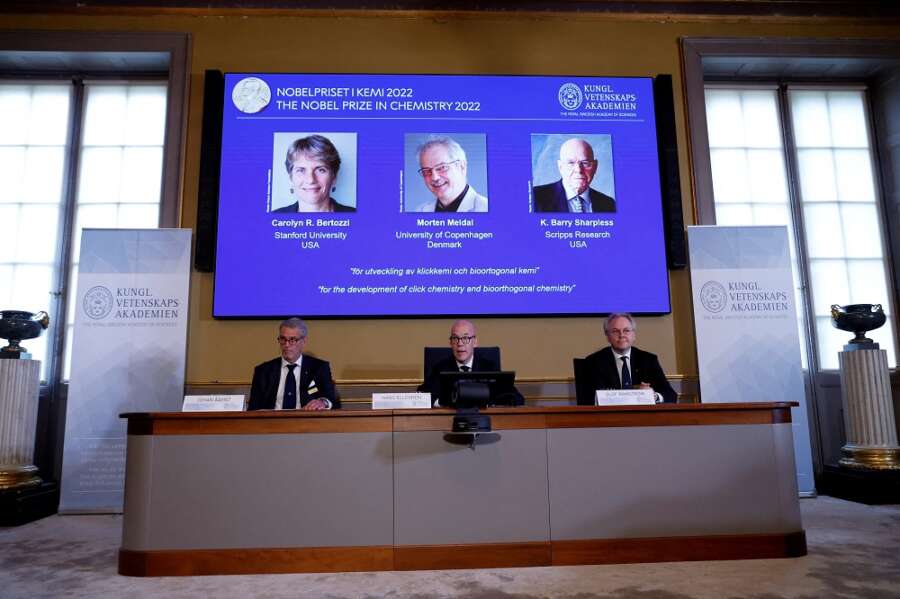 The field of click chemistry and bioorthogonal chemistry has been harnessed to improve the targeting of cancer pharmaceuticals now being tested in clinical trials, along with a host of health, agricultural and industrial applications.

“Combining simple chemical building blocks makes it possible to create an almost endless variety of molecules,” the award-giving body said in a statement, adding that “sometimes simple answers are the best”.

Danish winner Medal described click chemistry as a way to build complex structures and link them as if they were pieces of Lego, the plastic construction toy.

The technology is employed globally to learn more about cells and track biological processes. It also allows assembly in the lab of stable molecules without creating undesirable by-products that had hobbled older methods.

Sharpless joins an elite band of scientists who have won two Nobel prizes. The other individuals are John Bardeen who won the Physics prize twice, Marie Curie, who won Physics and Chemistry, Linus Pauling who won Chemistry and Peace and Frederick Sanger who won the Chemistry prize twice.

“I’m absolutely stunned, I’m sitting here and I can hardly breathe,” Bertozzi said from California after the academy reached her by telephone with the news she had won.

She added that as part of her work, she and her team managed to visualize and understand cell surface structures known as glycans, leading to a new idea in cancer immune therapy.

The academy said the laureates’ discoveries had been used far beyond oncology, enabling products such as antimicrobials, herbicides, diagnostic tests, corrosion retardants and brightening agents.

Bertozzi works at Stanford University, Sharpless works at the Scripps Research institute, both in California, while Meldal is at the University of Copenhagen, Denmark.

Meldal told Reuters his legs and body started shaking with excitement when the Nobel committee called.

“It is not every day to have a Dane get the Nobel Prize,” he said, adding he had been recording a teaching video when he received the news and that he was very proud on behalf of his colleagues and team.

The third of the prizes unveiled over six consecutive weekdays, the chemistry Nobel follows those for medicine and physics announced earlier this week.

The 2021 chemistry award was won by German Benjamin List and Scottish-born David MacMillan for their work in creating new tools to build molecules, aiding in the development of new drugs as well as in areas such as plastics.

The prizes for achievements in science, literature and peace were established in the will of Swedish dynamite inventor and businessman Alfred Nobel, himself a chemist, and have been awarded since 1901. Economics was added later.

The prizes have been awarded every year with a few interruptions, primarily for the world wars, and made no break for the COVID-19 pandemic though much of the pageantry and events were put on hold or temporarily moved online.