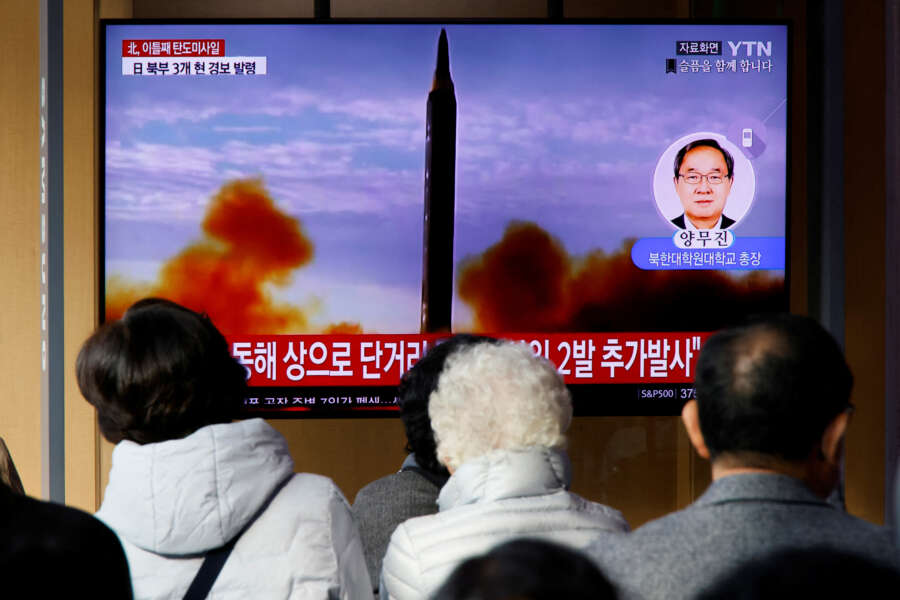 SEOUL (Reuters) -North Korea fired about 80 artillery rounds into a maritime border zone overnight, South Korea said on Friday, as defence ministers from Seoul and Washington vowed to demonstrate determination in the face of missile tests by the North.

North Korea fired multiple missiles into the sea on Thursday, including a possible failed intercontinental ballistic missile (ICBM), prompting the United States and South Korea to extend air drills that have angered Pyongyang.

Beginning shortly before midnight on Thursday, South Korea’s military said it had detected more than 80 artillery rounds fired into the sea by North Korea, in what it says is a violation of a 2018 inter-Korean agreement.

The South issued a warning communication to the North over the firing, the South Korean Ministry of Defence said in a statement.

Tensions have been rising as North Korea has conducted a record number of missile launches this year, including at least 23 on Wednesday alone and the ICBM launch on Thursday.

A senior U.S. administration official said on Thursday that although the United States had said since May that North Korea was preparing to resume nuclear testing for the first time since 2017, it was not clear when it might conduct such a test.

The United States believes China and Russia have leverage to persuade North Korea not to resume nuclear bomb testing, the official told Reuters.

Diplomats said Washington had asked the U.N. Security Council to convene publicly on North Korea on Friday, a request backed by other council members Britain, France, Albania, Ireland and Norway.

In recent years the 15-member council has been split on how to deal with North Korea and in May, China and Russia vetoed a U.S.-led push to impose more U.N. sanctions in response to North Korean missile launches.

“I think the Pyongyang regime is solely responsible for the current situation,” Steinmeier said via an interpreter during a news conference after talks with South Korean President Yoon Suk-yeol.

On Thursday, Pak Jong Chon, secretary of the Central Committee of North Korea’s ruling Workers’ Party, said Washington and Seoul had made a very dangerous decision by extending the exercises, and were “shoving” the situation out of control.

“The United States and South Korea will find that they have made a terrible mistake that cannot be reversed,” said Pak.