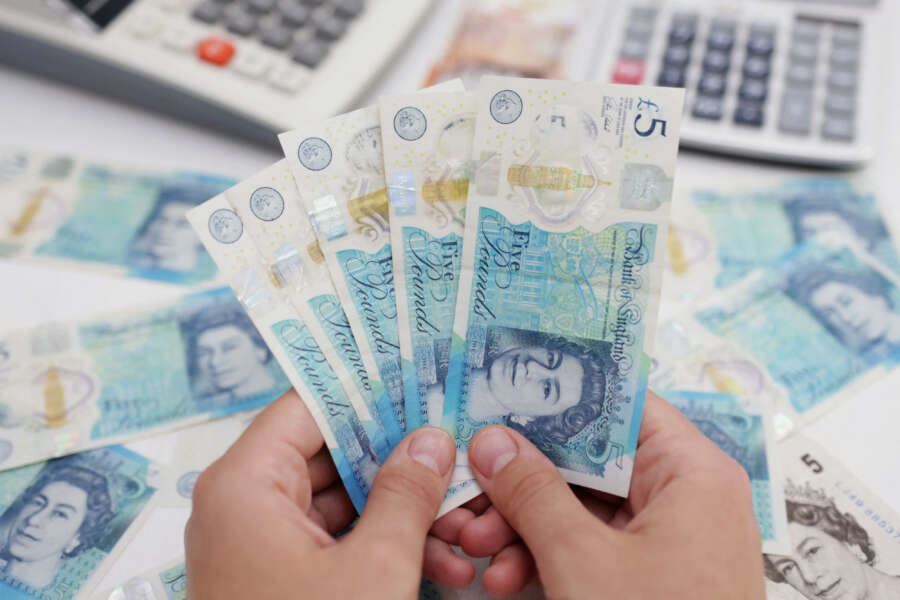 TOKYO (Reuters) -Sterling tumbled nearly 5% to an all-time low on Monday as investors ran for the exits after the new government’s fiscal plan threatened to stretch Britain’s finances to their limits.

The currency dived as much as 4.85% to an unprecedented $1.0327, extending a 3.61% dive from Friday, when finance minister Kwasi Kwarteng unleashed historic tax cuts, and the biggest increase in borrowing since 1972 to pay for them.

Economists and investors said Prime Minister Liz Truss’s government, in power for less than three weeks, was losing financial credibility in unveiling such a plan just a day after the Bank of England hiked interest rates to contain surging inflation.

“The weekend press tarred and feathered sterling with assertions of its emerging-market status,” he said.

“I don’t buy that schadenfreude. Still, there is now bound to be speculation of an emergency BOE meeting and rate hike.”

Kwarteng’s announcement marked a step change in British financial policy, harking back to the Thatcherite and Reaganomics doctrines of the 1980s that critics have derided as a return to “trickle down” economics.

The so-called mini budget is designed to snap the economy out of a period of double-digit inflation driven by surging energy prices and a 15-year run of stagnant real wage growth.

In total, the plans will require an extra 72 billion pounds of government borrowing over the next six months alone.

British government bond yields surged by the most in a day in more than three decades on Friday, with yields on the five-year gilt – one of the most sensitive to any near-term shift in interest rate or borrowing expectations – up by half a percentage point.

“When we see those gilt markets open a little later on, we’re probably going to see a pretty sharp spike,” said Chris Weston, head of research at Melbourne-based brokerage Pepperstone.

“In this environment, you either need to see much higher growth – which isn’t happening at the moment – or you need to see significantly higher bond yields to incentivise capital inflows. To get bond yields up to those levels, you need to see the Bank of England coming out and doing an emergency hike.”