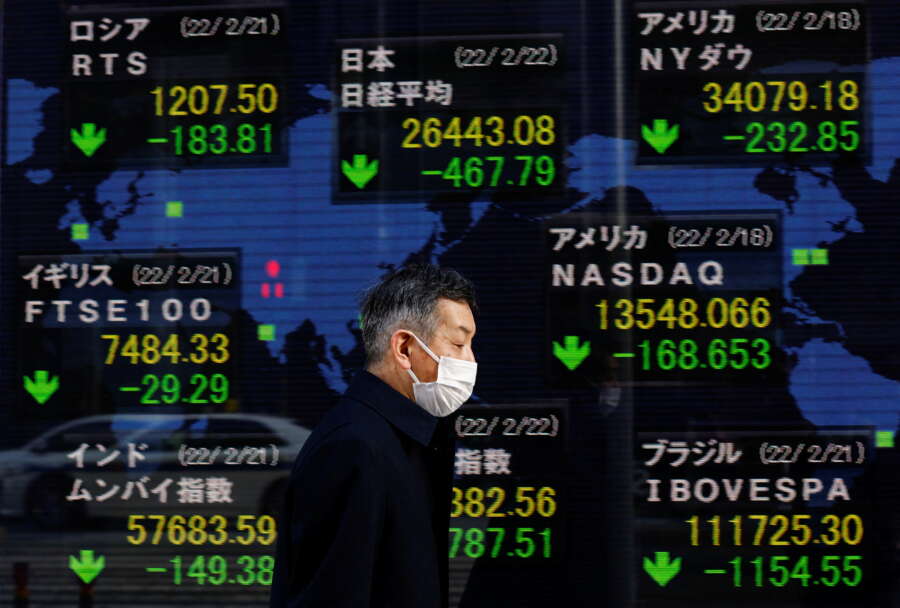 As one of the worst post-Cold War security crises in Europe for decades worsens, U.S. Secretary of State Antony Blinken said he believes Russia will invade Ukraine within hours after separatists on Wednesday asked for Moscow’s help to repel “aggression” and as explosions rocked the breakaway eastern city of Donetsk.

Asset markets have seen a sharp increase in volatility, with oil racing to near $100 per barrel and the Cboe Volatility Index, known as Wall Street’s fear gauge, up more than 55% over the past nine days.

Overnight, U.S. stocks took a beating, with the Dow Jones Industrial Average down 1.38% to barely above the level that would have confirmed a correction. The MSCI World Index, a leading gauge of equity markets globally, skidded to its lowest level since April 2021.

In Asia on Thursday, the selloff showed no signs of abating.

Investors have also been grappling with the prospect of imminent policy tightening by the U.S. Federal Reserve aimed at combating surging inflation.

“A supply shock to commodities and the need for a higher geopolitical risk premium though may mean inflation remains elevated for longer with the risk the hiking cycle may need to be steeper,” said Tapas Strickland, director of economics at National Australia Bank.

While expectations of an aggressive 50-basis-point hike at the Fed’s March meeting have eased, Fed funds futures continue to point to at least six rate hikes this year. [FEDWATCH]

The Russian rouble firmed slightly by 0.55% against the dollar after falling more than 3% on Wednesday.

“Markets are now more adequately pricing in the risk of something horrific happening. That combined with the uncertainty is a horrible environment to be in. No one wants risk exposure when that’s floating around,” said Rob Carnell, head of Asia Pacific research at ING.

U.S. says Russia on brink of Ukraine attack after separatist plea for help