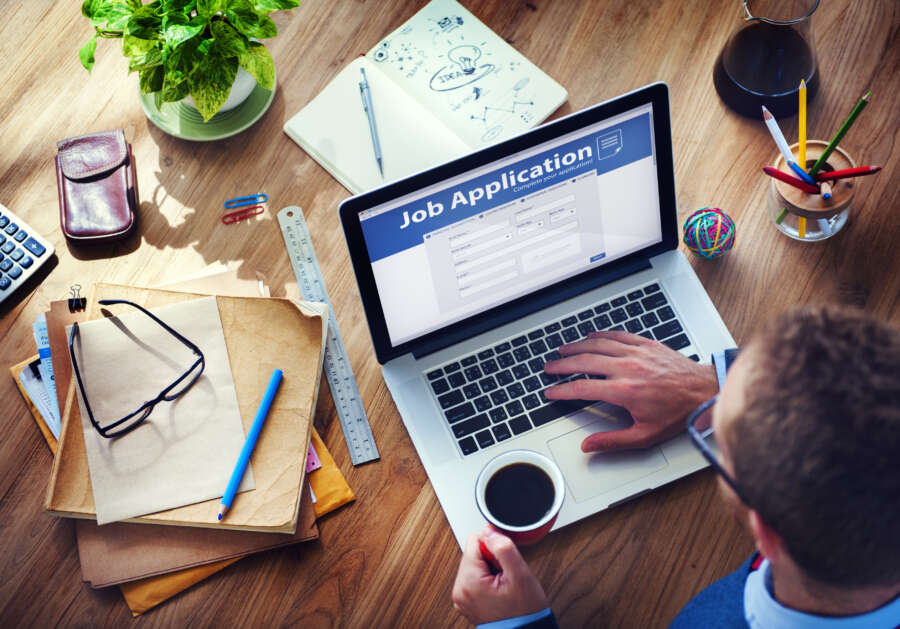 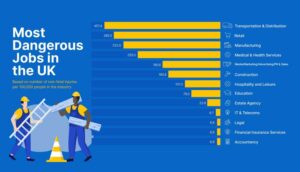 Across the UK, job conditions and expectations have seen a serious shift over the last few pivotal years. Factors that may not have been a priority pre-pandemic, such as well-being support and flexibility, are now of the utmost importance. As many of us have come to find, your working environment can have a huge effect on your mental and physical health – never mind your performance.

Research conducted by Phoenix Health & Safety has revealed which jobs are the most dangerous and the best for your career welfare. Enter the ‘Career Welfare Index’.

Topping the risk list are roles in the transport and distribution sector, which has over 1.5 million people working within it. There is an average of 437 people per year injured in these jobs, but this comes with little surprise, as many of the roles require the operation of heavy machinery both within a warehouse and on the road. Those working within this sector should be taking the necessary health & safety training to ensure they aren’t exposing themselves to further unnecessary risk.

Unexpectedly, retail came in as the second riskiest industry with an average of 395 people being injured per capita. Often an overlooked, but important area for health & safety training, those who work in retail are particularly at risk from manual handling and working at height.

Best jobs for your welfare 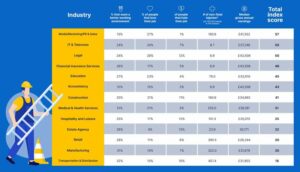 Keen to find a working environment that works for you? We’ve got you. After amalgamating data on 5 key factors affecting people’s career and workplace wellbeing, Phoenix Health & Safety was able to award different job sectors with an overall ranking score – the higher the score, the better the employee wellbeing in that job role.

Coming in at number one with the best career welfare was media, advertising, marketing and sales – with employees in this industry earning an impressive 33% above the national salary average. Closely followed by the IT & Telecoms and legal sectors. Both of these industries tally a fierce 50 points on the index as, not only did they score highly for loving their job, employees in this sector generated a low level of non-fatal industries. So, if you’re keen for a safer career, desk-life might be just the right kind of role for you.

According to findings, people who work in the legal sector are the happiest with the best pay, with 28% of employees enjoying their job as well as earning over 39% more than the average UK salary.

Construction, which sees many of its tradespeople benefitting from an average 12% higher salary than other industries, also placed fairly well at number 6 – with 21% of construction workers claiming that they really enjoyed their job. Nick Higginson, CEO of Phoenix Health & Safety, further observes:

“Coming in strong at second place was media and marketing, with 27% of workers saying that they were passionate about their roles and enjoyed their working environment. Due to many marketing agencies placing a lot of value on creating an attractive work culture, this result isn’t a huge surprise.

Interestingly, however, only a small 4% of estate agents said that they enjoyed their job – 12% even expressed that they hated it! With pressures such as individual sales and commission coming into play with this type of role, the estate agency sector may need to consider more of a team-led environment to boost morale”

“Much to our surprise, retail came in as the second riskiest sector to work in after transport, with a high average of 395 employees being injured per 100,000 workers in the industry. Though it may seem like a safe option, working in retail often entails hazardous high storage units, use of ladders, high powered machines and a reliance on teamwork. Without the proper safety measures in place, industries that involve a lot of manual handling like retail – are a risky business to enter into”