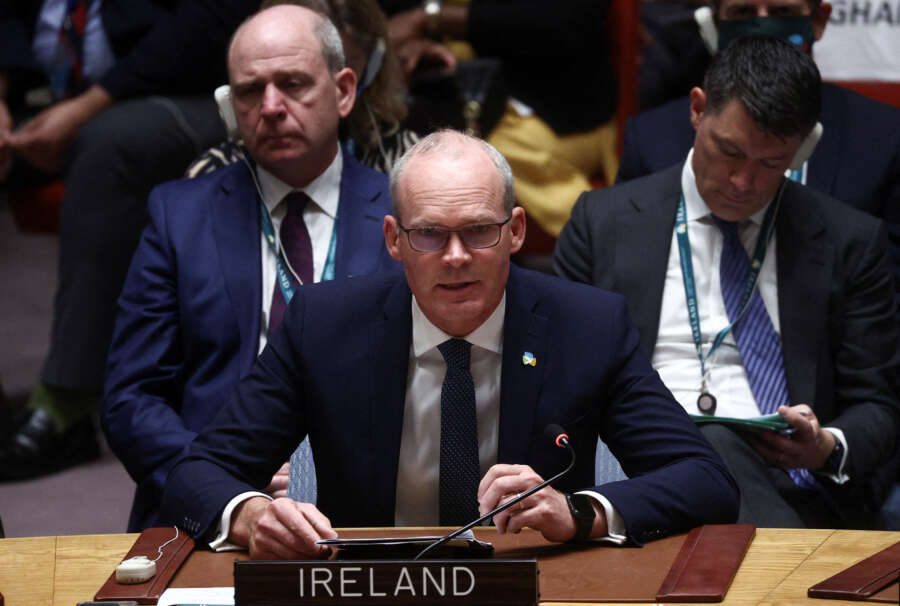 BELFAST (Reuters) -The UK government could change the law to delay elections in Northern Ireland, the Republic of Ireland’s foreign minister said on Wednesday after a meeting with the British minister for the region.

The deadline passed last week for forming a power-sharing government following elections in May and Britain’s Minister for Northern Ireland Chris Heaton-Harris said he was legally obliged to call new elections within 12 weeks.

Heaton-Harris has so far failed, however, to set a date and has not publicly raised the prospect of a delay. He said on Tuesday that he would provide a further update on next steps “in due course” following meetings with the main political parties.

Irish Foreign Minister Simon Coveney told journalists in Belfast after meeting Heaton-Harris that there were only two options, “a legal obligation to set a date for an election or else there will have to be new legislation to avoid an election at this time.”

“No decisions have been made yet but certainly we’re not going to have to wait weeks for that clarity … I made it clear that the Irish government’s position is that we don’t believe an election at this time is a good thing for Northern Ireland.”

Coveney said the region’s main political parties shared his view that an election now would be “unnecessary and unhelpful.”

Northern Ireland has been without a functioning devolved government since February when the pro-British Democratic Unionist Party began a boycott of the regional assembly in protest at post-Brexit trading arrangements.

The main parties have said they expect a new vote will do little to break that stalemate. Irish nationalists Sinn Fein won the most seats for the first time in May’s voting and opinion polls have moved little since.

Britain and the EU resumed talks in October for the first time in seven months about their post-Brexit trade dispute over Northern Ireland and Coveney said a resolution was possible by the end of the year if both sides compromise.

The two sides are deadlocked over the Northern Ireland protocol, the part of the Brexit deal that mandated checks on goods moving to Northern Ireland from the rest of the United Kingdom because of its open land border with EU member Ireland.