Up and coming artist transforms home into stunning studio and gallery 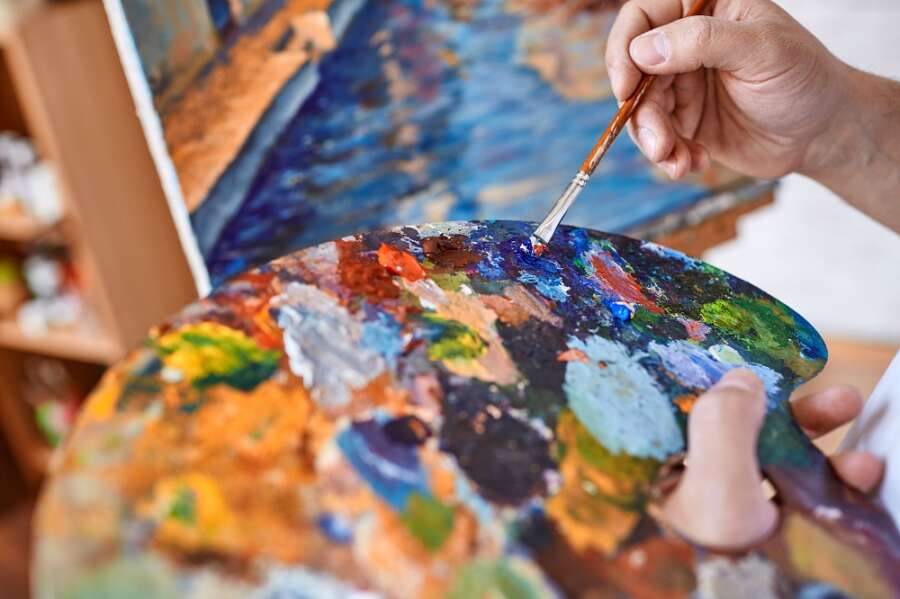 A renowned artist has converted his terraced home into a stunning space for his innovative work and is all set to reopen it to the public as the pandemic eases.

Jon Stiff of Stiffy Art (www.stiffyart.co.uk) won nationwide acclaim after starring in the Channel 4 series Drawers Off back in the spring of this year. But alongside TV fame, he has been bagging regular valuable commissions from private and business buyers alike.

Jon, of Stratford-upon-Avon, who turns 60 next month, also works as a litigator, fighting contentious claims, while also building his artist’s portfolio. He works in various styles – including floral, abstract, and surrealism using a variety of unexpected household items to paint, rather than brushes, as well as applying his art to unusual surfaces, from wheelie bins to discarded vehicle parts. Implements Jon adapts to paint include a garlic crusher, spatula, and turkey baster.

Recent commissions for prices of up to around £5,000 show that despite the apparently quirky nature of his work, Jon’s talent is being lapped up, making a genuine stir in well-connected arty circles.

Now Jon, who has also now teamed up with his seamstress daughter, Carrie, 30, to create art on homemade canvasses has launched a series of ‘open house’ events from his three-storey home in Bull Street, in Stratford’s historic town centre. The walls, ceilings, garden and even the furniture show off Jon’s eclectic and vibrant creative range.

Because of Jon’s mischievous business name, he also boosted his profile in a light-hearted feature on Radio One as DJ Scott Mills singled him out for a call. While he enjoys such moments in the limelight, he remains committed to the serious business of producing great art and leaving a noteworthy legacy.

“I am still experimenting and learning and am bowled over by the amount of support through word of mouth as my story spreads,”

“My journey as a professional artist started years ago. I was mesmerised and fascinated.

“Normality, standardisation and the status quo don’t sit well with me. Frankly, predictability and certainty violently oppose the change I am searching.

I want to be different,” said Jon.

“I have spent time in lockdown making my art more visible at home and it seemed a perfect idea to invite people inside to see for themselves.”

Family is at the heart of Jon’s passion for his craft, especially as he is inspired to follow his calling as an artist by his late nephew Corporal Graeme Stiff who was killed serving in Afghanistan, aged just 24, when his vehicle hit an explosive device, in March 2009.

Jon says: “We shared the same nickname as people with my surname do. When something as terrible as losing someone so brilliant and young happens, you feel disconnected from the world. To carry on, you have to do what you love.”

The first open house event was held in the summer and now Jon is planning another event, to held next spring.

More than three-in-ten businesses have failed to innovate during the pandemic, Ayming research reveals