Ford is the UK’s most popular car brand, with 9.28% of registered vehicles in the UK belonging to the American manufacturer in 2020.

That’s according to the newest study from Confused.com (Q2, 2022). The research analyses GOV.UK(1) vehicle registration data to uncover the changes in the UK’s car brand preferences between 2009 to 2020. The research reveals which car brands have been the most consistently popular, as well as identifying the specific models that are most favourable among UK drivers today.

German brands are increasing in popularity

By 2020, almost 3 in 10 (29.47%) of registered vehicles in the UK were made by a German manufacturer, including Volkswagen, BMW and Mercedes. This could be due to the fact that Germany was the third highest producer of passenger vehicles in the world in 2020 (2). It’s estimated that German manufacturers produced 4.66 million units in 2020 – a staggering 85% increase to the number of units produced by the USA (2.51 million units). In 2009, however, Volkswagen was the only German brand to be in the top 5 most popular manufacturers for the UK, with a market share of 8.04%. Now, Volkswagen, BMW, Mercedes and Audi make up 4 out of the top 5 most popular car brands.

It’s surprising that British car manufacturers such as Vauxhall and MINI are less favourable among UK drivers. From 2016 to 2020, the number of registered Vauxhalls decreased by 4%, and in 2017 Volkswagen overtook Vauxhall to become the second most popular brand. But, from 2009 until 2016, Vauxhall held second place, with at least 10% of registered vehicles belonging to the manufacturer.

First-time driver cars are the UK’s most popular models

Despite the overall number of Vauxhalls on the road decreasing over the last decade, the Vauxhall Corsa is currently the UK’s most popular car model. Known for their reliability and popularity among first time drivers, Corsas make up 2.48% of all registered vehicles in the UK. That’s 0.46% more than Volkswagen Golfs in second (2.02%).

Historically, Fords have always been the most popular choice among British drivers, due to their affordability, reliability and practicality. From 2001 to 2008, the Ford Focus was the most favoured car with over 5% of the market share. This was then overtaken by the Ford Fiesta in 2008 – when over 1 in 20 (5.80%) of registered vehicles in the UK were a Fiesta. Since then, the Fiesta has gradually decreased in popularity, with the Vauxhall Corsa (2.48% market share) and Volkswagen Golf (2.02%) overtaking in 2021.

“When it comes to getting a quote for car insurance, the type of car you drive is a key consideration for insurers, especially the cost of repairs. Typically, cars made by manufacturers with a higher production rate could be cheaper to insure. This is because parts are much easier to obtain, and therefore makes the overall repair process cheaper.

“If you’re looking to buy a new car, always research how much it would cost to insure, as you might find that your dream car could cost you significantly more to run.” 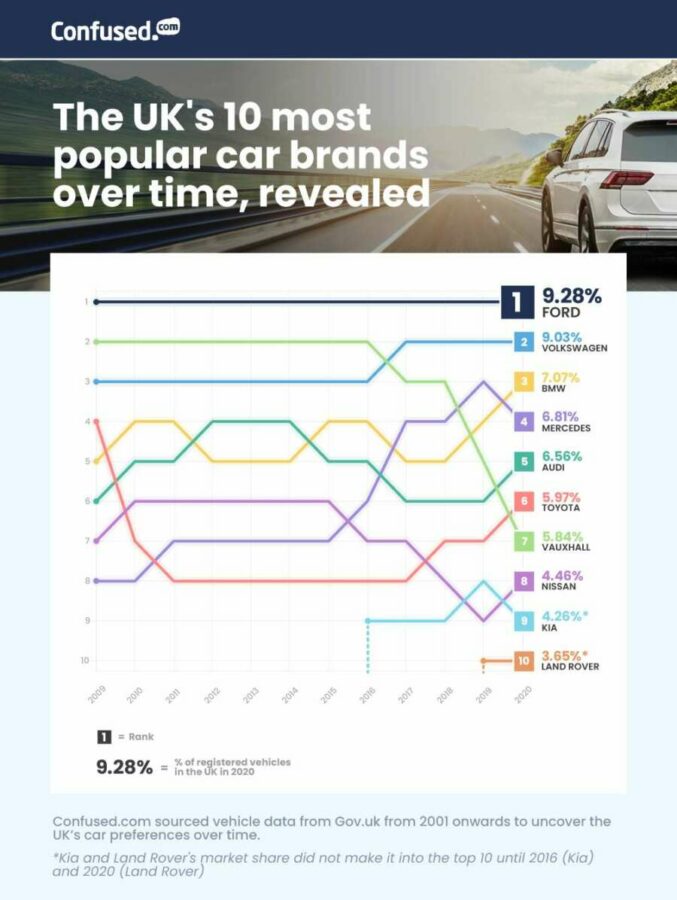