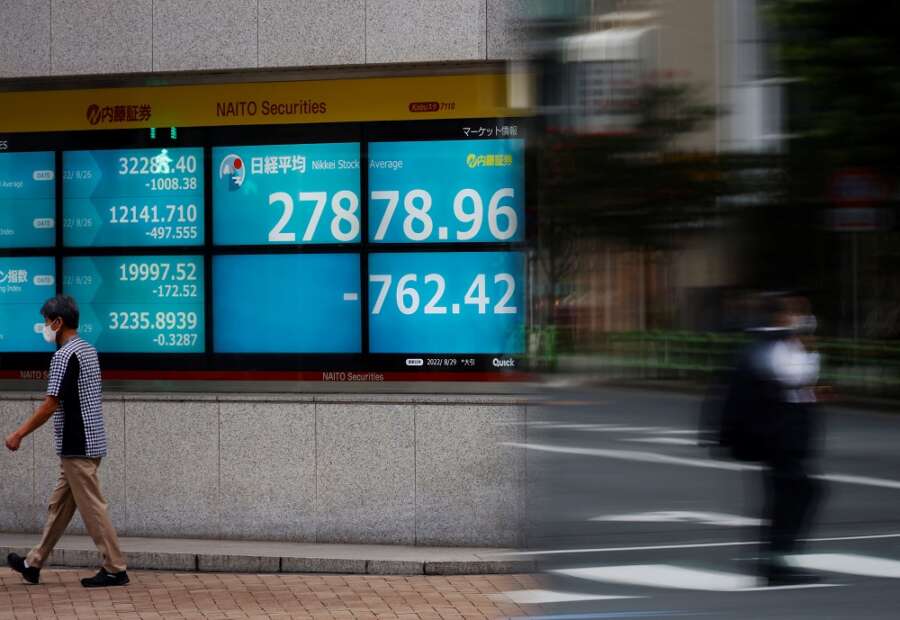 FILE PHOTO: A man wearing a protective mask amid the coronavirus disease (COVID-19) outbreak, walks past an electronic board displaying Japan's Nikkei index outside a brokerage in Tokyo, Japan August 29, 2022. REUTERS/Kim Kyung-Hoon
Headlines

LONDON (Reuters) – Record-high inflation in the euro zone compounded recession fears stalking markets on Wednesday as central banks on both sides of the Atlantic prepared to raise borrowing costs for businesses and households again next month.

Wall Street was set for a muted start as U.S. crude oil prices sank for a second day, trading below $90 a barrel on worries about demand in a struggling global economy, while untamed inflation knocked the euro and sent investors to the safe haven dollar.

The MSCI all-country stock index eased 0.2% on the day and was down 18.5% for the year as war in Ukraine, surging energy prices and rising interest rates take their toll on risky assets.

The STOXX share index of 600 companies dropped 0.5% to a six-week low, leaving it down about 14% for the year.

U.S. e-mini equity futures pointed to slightly firmer start on Wall Street for the S&P 500 after its 1.1% slide on Tuesday.

Economic news remained grim with overnight data showing that economic activity in China, the world’s second-largest economy, extended its decline this month after new COVID infections, the worst heatwaves in decades and struggles in the property sector.

Headline euro zone inflation for August in the euro zone rose to another record high, beating expectations and solidifying the case for a hefty rate hike by the European Central Bank on Sept. 8.

Russia halted gas supplies via a major pipeline to Europe on Wednesday for three days of maintenance amid doubts it won’t be switched back on, adding to worries of energy rationing during coming winter months in some of the region’s richest countries. The energy crunch has already created a painfulcost-of-living crisis for consumers and businesses and forcedgovernments to spend billions to ease the burden.

German bonds were set for their worst month in over 30 years as euro zone inflation hit a record high.

Markets are betting that the U.S. Federal Reserve and the ECB will both raise their key borrowing costs by 75 basis points when they meet next month.

Jamie Niven, a senior bond fund manager at Candriam, said rate hikes anticipated for this year had been largely priced into markets, especially in the United States.

“I think there is more pain to come in credit markets and in equity markets before we see a brighter outlook. I don’t think central banks are going to be in a state where they can cut to kind of soften the blow of recession,” Niven said.

While there may be occasional quick flips or dramatic rallies back into riskier assets like stocks at times, they will ultimately be lower towards the end of the year, Niven said.

U.S. non-farm payrolls data due on Friday could make the case for a big rate hike, analysts said.

The two-year U.S. Treasury yield, which is relatively more sensitive to the monetary policy outlook, hit a 15-year high at 3.497% overnight, but eased back to 3.4786%.

Sterling is set for its worst month since late 2016 against the dollar as UK inflation is already at 10% and rising, with the Bank of England set to increase rates next month.

U.S. West Texas Intermediate (WTI) crude futures were down 3.3% at $88.55 a barrel, after sliding $5.37 in the previous session driven by recession fears. Brent crude futures for October fell 3.6%.