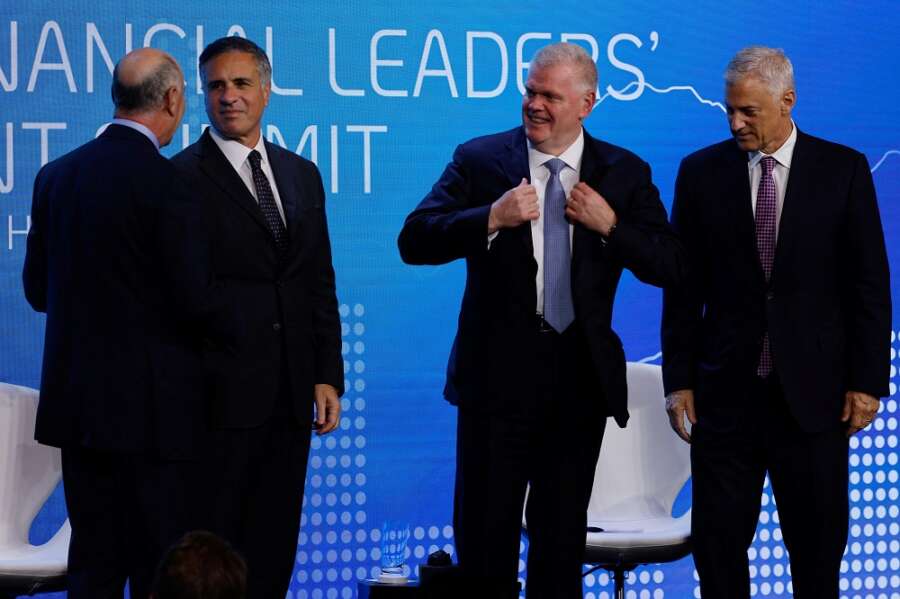 By Xie Yu and Summer Zhen

HONG KONG (Reuters) – Central banks will get inflation under control, but there will be turbulence in the near-term due to monetary tightening and geopolitical risks, top bankers said at a summit in Hong Kong on Wednesday.

Morgan Stanley CEO James Gorman said his gut feeling was that central banks would manage to curb price rises but investors would need to get used to higher inflation — of around 4% versus 1-2% before “this crisis”.

“It’s a painful transition, but not an unexpected transition,” said Gorman, also the bank’s chairman, at the Global Financial Leaders’ Investment Summit.

It was Hong Kong’s biggest corporate event since it shut its borders in 2020 and introduced restrictions to combat COVID-19.

Major central banks have embarked on some of the most aggressive round of rate rises in decades in a bid to curb red-hot inflation, risking a downturn in the global economy.

“(It) allows exposures where there’s leverage in the system to be amplified very quickly,” he said, pointing to the situation in Britain, where former British Prime Minister Liz Truss’s mini-budget triggered a slump in gilts and liquidity crunch in pension funds in September and early October.

If central banks find a way to tame inflation meaningfully and in a balanced way, it will “increase the chance of a soft landing” for their economies, Solomon said.

Their comments come hours before the U.S. Federal Reserve is widely expected to deliver its fourth consecutive 75-basis-point interest rate hike. Investors are looking to see whether the central bank could signal a slowdown in the pace of monetary tightening, even as consumer price inflation is running above 8%.

Bankers at the conference also worried about geopolitical risks. Those have been growing as the Russia-Ukraine war escalates and tensions between China and the United States intensify.

“If I had one or two concerns, the spreading of geopolitical tension would be one,” said Liu Jin, President of Bank of China, without elaborating further.

Michael Chae, Blackstone’s chief financial officer, also highlighted “rising tensions around the world” and the threat they pose to stability.

Monetary and geopolitical uncertainties have put investors on the sidelines, said UBS Group Chairman Colm Kelleher, pointing to the “record levels of cash” in global wealth management accounts as evidence that people are holding on to their money.

“Clients are clearly on the sidelines, as you’ve had over the last nine months pretty dire returns in equities and fixed income, and commodities, except for selective spots,” he said.